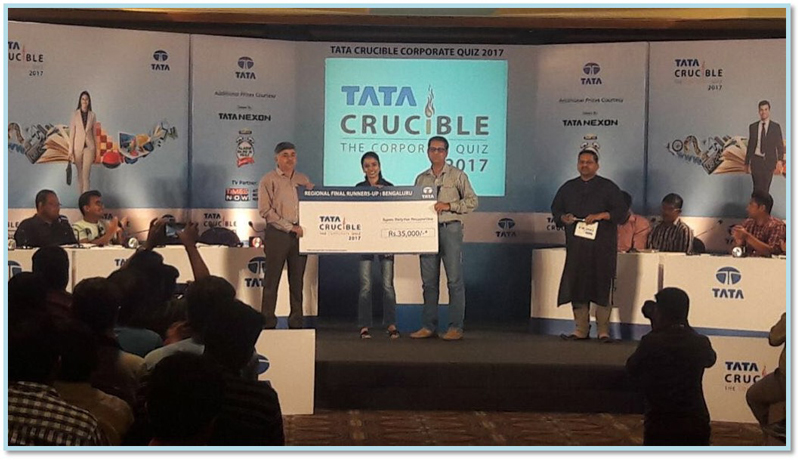 A huge downpour on a Saturday afternoon at Bangalore did not stop the three hundred people from being part of their edition of Tata Crucible. Quizmaster Pickbrain, who comes with roots from the city, was as always, the darling of the crowds. He sure delivered in his own distinctive style peppered with witty remarks. A distinctly higher standard prelim led to the finalists.

The finale was an excellent display of the high quizzing standards Bangalore has, all six teams battling measure for measure, playing out strategies that were a delight to watch. The questions from Pickbrain matched the occasion, the ones that went unanswered by the teams, being cracked by the audience.

The quiz moved on and all teams seemed on par, till the duo from Nexus played a few double badges taking themselves into the lead. In the meantime, the ever- consistent Oracle team tried to move on and came up with some brilliant answers, but took a few negatives that knocked them back. The Amazon team did well too but surprised many by not choosing to play at a higher value even when they seemed confident. National Instruments and Goldman Sachs scored in bursts but could not find momentum to challenge the leaders.

The Shell team kept scoring at regular intervals and then accelerated with a double setting themselves up right behind team Nexus taking the quiz into the final question. With nothing to lose Shell went for the final poser but had to settle for the runner up title. Nexus on their part played a very mature game, scoring when required and then deciding to play safe, hedging that they had put enough on board to defend.

The guest of honour Mr. Bhaskar Bhat, MD, Titan Industries, spoke of how the quiz mirrored in many ways how India has grown and changed in the last 14 years, powered by knowledge enthusiasts.