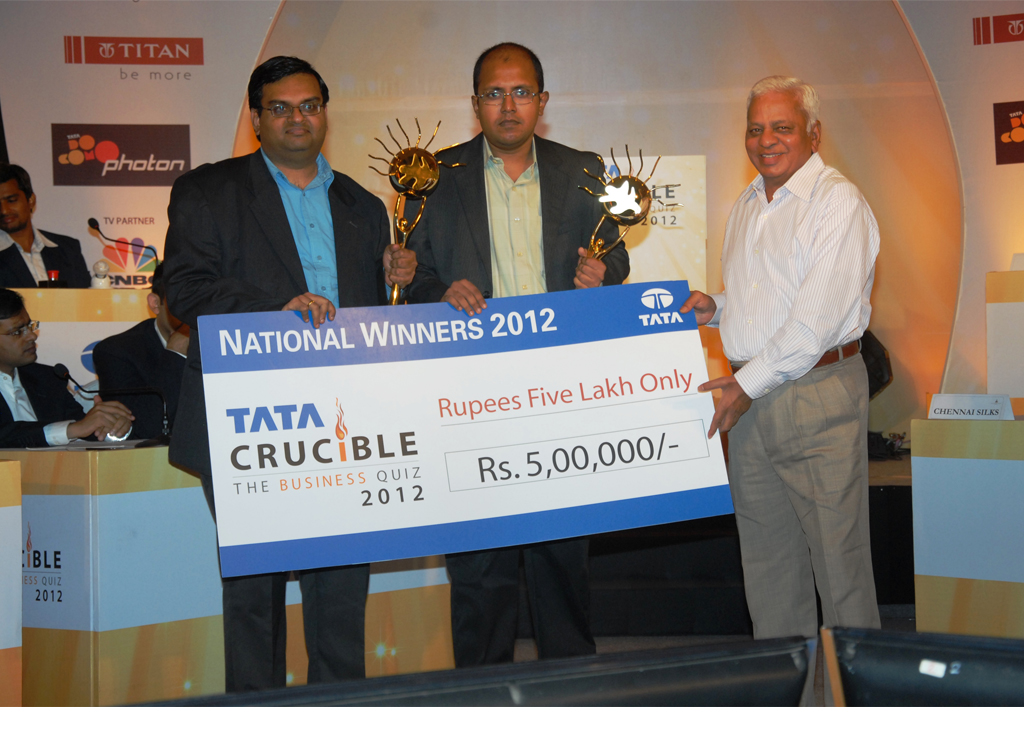 The nation’s best quizzers from across 21 locations converged at the Taj Mahal Palace for the mega final of the 2012 corporate edition of Tata Crucible. The afternoon began with two keenly contested semi finals for the non-Tata teams with tough questions leading to the top eight teams.

The national finale of the Tata track of the quiz that followed was a keen contest with all teams playing well early on. The onset of the buzzers separated the teams from TCS (Jayakanthan and Sreekanth) and TCS (Priyamvad and Pravin Verma) from the others who could not match the pace of these two teams on the buzzers. Eventually, the two teams battled neck to neck till the final question where the defending champions TCS (Jayakanthan and Sreekanth) cracked a poser about the Taj Falaqnuma Palace to be crowned champions for the second year in a row.

The non Tata Track of the quiz was a complete contrast to the previous final. Teams were tentative, cautious and very guarded in their approach, resulting in all teams moving from one round to another in a huddle. As the buzzers came into force, team Genpact moved ahead and lost some ground while Sai Mitra Constructions did very well to gain crucial points. Oracle India in the mean time gave some really good answers to get ahead while Chennai Silks were just behind all these teams.

In the final frontier, with a couple of brave answers, Sai Mitra were in the lead along with Chennai Silks before the latter inched ahead with well crafted answers about Verghese Kurien. On the final question, team Oracle went for the kill and took a negative while a right answer would have won them the title. Sensing an opportunity, Chennai Silks closed the quiz with a cracker to take the national crown for the first time.

Padmabhushan recipient Mr. Muthuraman, the Vice Chairman of Tata Steel and Chairman of Tata International was the guest of honour. He underlined the need for continuous learning and the power of knowledge and urged the corporates to keep quizzing and most importantly to get their children involved in such knowledge activities.