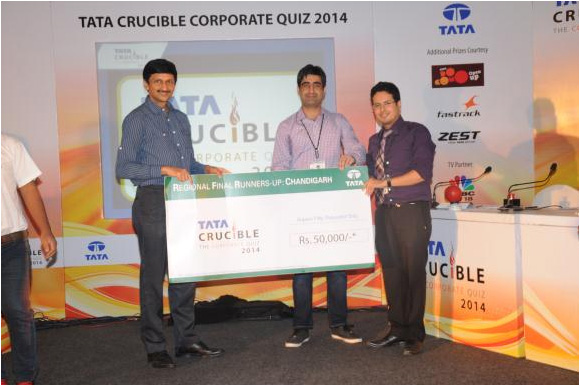 A pleasant Monday evening at the Taj in Chandigarh seemed a perfect setting for the city to host its Tata Crucible. Corporate teams from several industries like IT, media, manufacturing and consulting took part. A relatively tough prelim led to the finalists.

The finale was a very close battle right through the initial rounds with Wipro, Infosys and BPCL with their noses in front. The middle segment got these three teams ahead of the rest with Infosys in front.

The quiz moved on and with a couple of good strikes. Wipro got into the lead making the final really absorbing but they went for the buzzer one too many times resulting in negatives. In the meantime, BPCL scored a couple of times and held their nerve till the last question where they trailed Infosys by 5 points. With a nothing to lose scenario, they went for the final question and cracked it in style to move into the northern zonals.

The guest of honour Mr. Vivek Atray (IAS), Director School Education, Haryana and well known author of ‘Move on Bunny’ and ‘Dubey ji bounces back’ said the beauty about India is “The ability of the use of mental sharpness and the power of the brain and yet balance it with our traditions and culture, that separates us”.