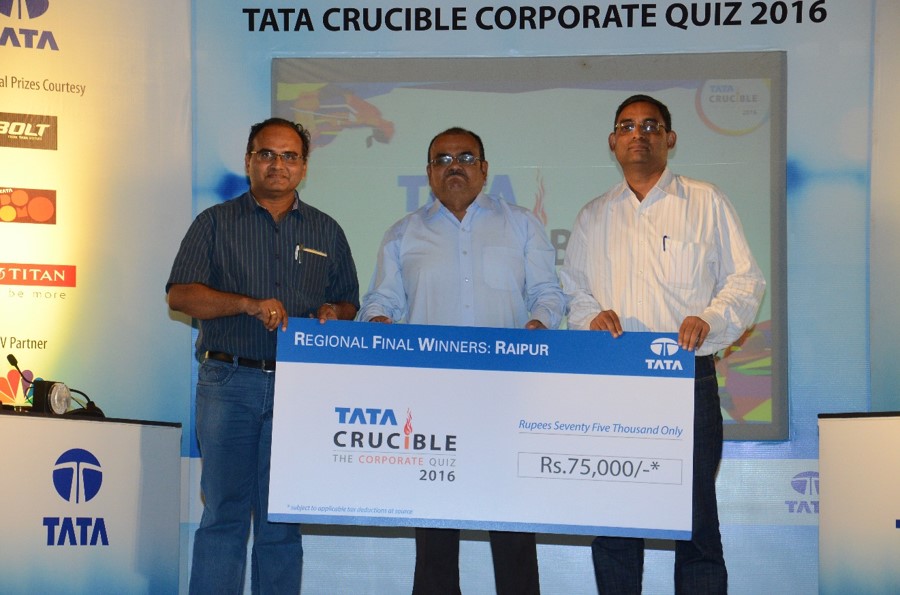 It was a rainy day at Raipur that many passionate quizzers braved to be a part of in this city edition of the quiz.

Quizmaster Pickbrain started proceedings with crisp introductions and moved on in very a business-like manner, clinical and swift with the prelim breezing through the 20 questions. Four BSP teams and two others made it to the finale.

The final was a cliff-hanger with Ashish and Harpreet blazing away to 200 in the first segment of the quiz. The seasoned quizmaster Pickbrain threw a word of caution to them saying They have a great start, it depends now on how they handle it from here.

Soon enough they took half chances and started losing ground as they slipped from the lead and could never recover.

The other BSP teams and KPTL were scoring and in the final rounds, four teams evenly placed with an equal chance to win the quiz. The quality of answers underlined the ever increasing interest and comfort towards a Tata Crucible in this region of India.

In the final few questions, tactics were tested but Ashish and Harpreet held on. As the excitement mounted and the quiz inched to a close, it was a battle between BSP represented by Jaggi and Shekar and KPTL, the former clinching the runner up title.

The guest of honour, Dr. Sanjay Singh from Chhattisgarh Tourism Board, gave away the prizes.