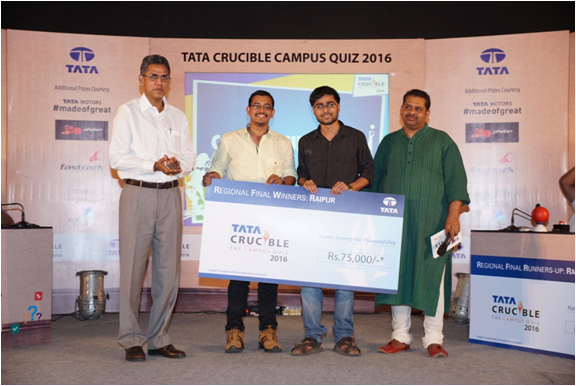 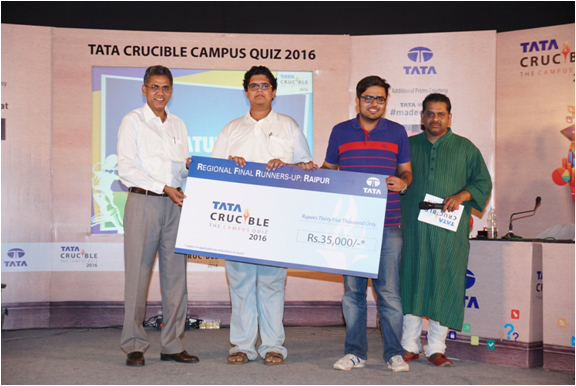 The early signs of a gruelling summer seemed a perfect setting for an afternoon of quizzing as teams gathered for the Raipur edition of Tata Crucible to take on the heat of Indiaâ€™s toughest business quiz. A not so easy prelim set the stage for the afternoon with teams scoring well despite the tall order. The finalists who made it were:

The final started with some quick scoring by the HNLU duo and the team of Prasun and Vijay as they soon left the other teams behind. What followed was an amazing display of knowledge, tactics, grit and guts by both teams.

Riveting, nail biting and tense, the two teams battled question after question till the final one. With one question remaining HNLU was in the lead and as the seasoned quizmaster took a deep breath to comment “The final question will decide who moves on from here”, summarising the finale.

He belted out the final salvo and the NIT boys took the initiative and went for the buzzer to crack a tough poser and out-beat a very worthy law team to make it to the zonal. Interestingly, the champion team had a contestant who had rushed from his native after his sister’s wedding the previous evening, in time to not miss his favourite quiz. Perhaps, it was his passion that stood by him and his teammate on the final question as they powered their way to the zonal.

The guest of honour, the Director of IIM-Raipur, appreciated the teams and spoke of how such platforms are important for creating a knowledge conscious community.