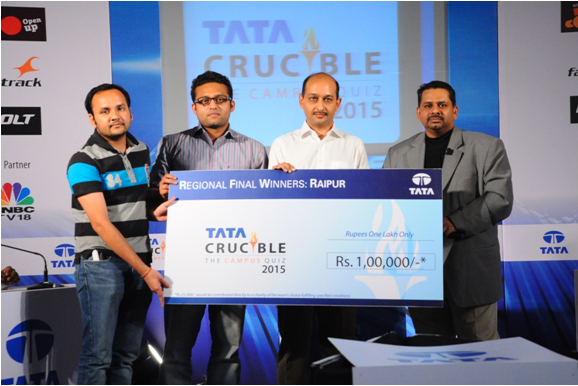 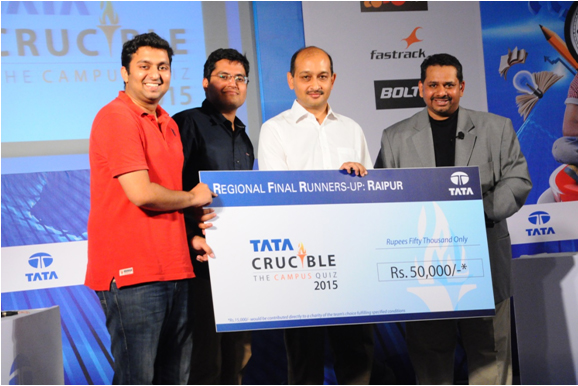 A packed banquet at the beautiful Taj Gateway at Raipur with over 300 students despite India playing a game at the World Cup indicated the passion for Tata Crucible here. Quizmaster Pickbrain got down to business from the word go and the prelim started with a brisk set of 20 questions and that led to the finalists.

The final began with an observation from the seasoned quizmaster that despite the prelim being of a high standard, teams had scored very well and the cut off stood as high as 15 on a set of 20 posers.

The final was an absolutely riveting one with Pranjal and Siddharth from HNLU (Hidayatullah National Law Univ) taking an initial lead and playing with great confidence. The IIM Raipur duo of Abhishek and Arpit did not get their grip on the quiz early on but as the quiz progressed they started progressing as well. Another IIM team of Bharadwaj and Ravi also did well but could not sustain the momentum as the quiz progressed.

Mid way into the quiz, Abhishek and Arpit crossed Pranjal and Siddharth who took too many negatives and relinquished their lead. From here it was the strategy that the IIM boys deployed by out-thinking the teams on tactical buzzer play and clever deployment of ‘Power Play’ that got them to the finish line ahead of the others.

Mr. Subrat Sahoo (IAS), Secretary School Education, Govt. Of Chhattisgarh, appreciated the HNLU team for the confidence they displayed even when answered incorrectly and congratulated the winning team for the strategic manner in which they approached the quiz. He added “Modern quizzing is a combination of what you know and how you play it”.