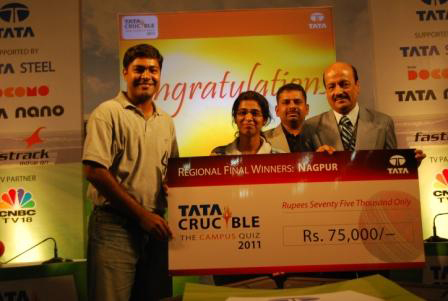 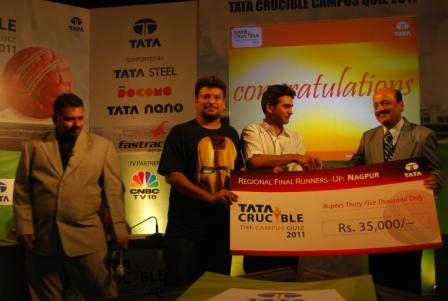 “Tata Crucible is so huge for all of us on campus – the way we track each city, the way we prepare for months in anticipation of this one day……” rattled a young quizzer who has been part of the action for the last couple of years. In many ways these words summarized the passion this city has towards quizzing as more than a 140 teams battled in the prelim.

The tone for the afternoon seemed set as the defending champion Neha Katyal failed to make it to the final in the top four category and had to battle a super over and then qualify into the final, underlining the increased competitive spirit at Nagpur.

The final witnessed a very close battle for the first couple of overs with four teams going neck and neck, a few of them not playing the power play to their own peril and with Neha and Merwin scoring very effectively of the passes to get ahead.

The buzzer overs were teasing and tested the character of the teams as some of the chose to risk a few blows and that made the battle even more interesting. Divya and Soumayajit (winner of 2010) at this stage tried to move on but hit a few negatives, while SRKNEC were trailing VNIT who in turn were trying to catch up with IMT (Neha and Merwin).

In the final over the IMT duo held on to their lead without taking any undue risks while SRKNEC came up with a brilliant answer off the first ball and then backed it with a last ball super six to inch past IMT as runner up. A truly great atmosphere, loads of prizes, awesome questions and unforgettable quizzing.