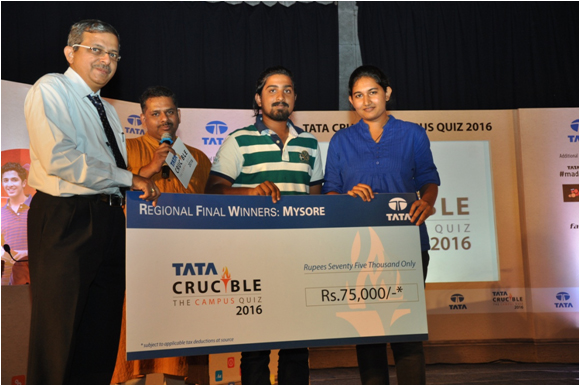 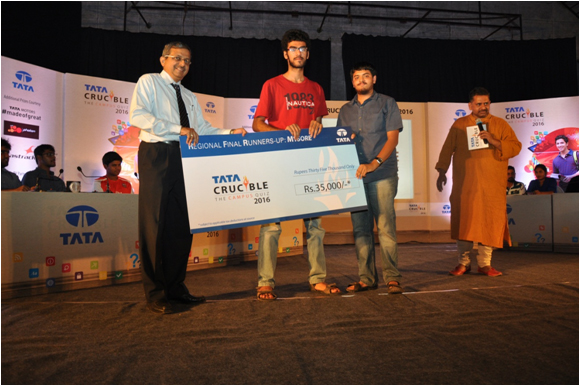 Mysore was playing host to a Tata Crucible for the first time. Over 800 students turned out for the first edition of the quiz which they had always followed on television. Their favourite quizmaster Pickbrain arrived on stage to an applause and whistles, akin the entry of a Bollywood star.

He soon went about the task of belting out his posers in an easy set of 20 questions. A nice sprinkling of questions from Mysore did help teams who were quizzing for the first time.

The finale was a very close battle right through the initial rounds with SJCE, NIE and SIT, allwith their noses in front. The middle segment got these three teams ahead of the rest with NIE in front.

The quiz moved on and with a couple of good strikes,NIE got to a comfortable lead. The SJCE team of Samarth and Shrinidhi and SIT went for the buzzer one too many times,resulting in negatives. The SJCE duo of Srikar and Shreyas were also in the hunt with some good strikes.

In the meantime, NIE scored a couple of times and held their own till the last question,to clinch the first ever title at Mysore. With a ‘nothing to lose’ scenario emerging, the SJCE team of Srikar and Shreyaswent for the final question and cracked it to outsmart SIT Tumkur for the runner up title.

The guest of honour, Dr.Parasuraman, Director – SDM Institute of Management, appreciated the teams for being smart and fast.