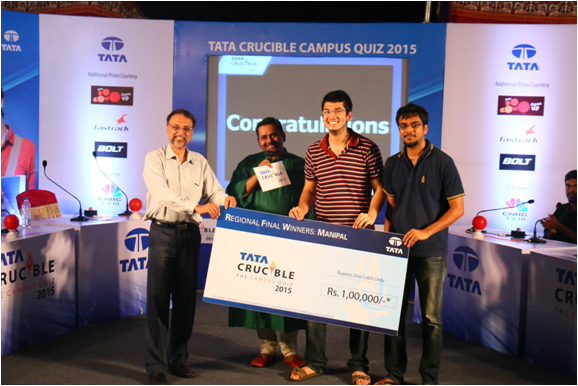 Close to 200 teams thronged the lush green lawns of the sprawling TAPMI campus for the much awaited Manipal final of Tata Crucible. The enthusiasm was matched by the quick wit and smart one-liners from quizmaster Pickbrain as he went about hosting a brisk prelim of 20 questions. The finalists who made it from the prelim were:

The final was a thriller with the team from NITTE off to an early lead to be followed by the TAMPI teams who were both gaining and losing points. With the quiz moving at a brisk pace the NITTE duo seemed comfortable in their lead position and started playing safe in the ‘middle overs’.

The seasoned quizmaster cautioned that it could be a risky tactic as teams could score quickly and catch up. Prophetic were his words as the TAPMI teams caught up quickly as did the team from NIT. With one final question to go four teams had a fair chance to win the quiz and as Pickbrain fired the final salvo, the TAPMI team of Sudharshan and Vinayak took a risk that paid off and they emerged champions coming back from being in the negative to winning the quiz.

The guest of honour Dr. R. C. Natarajan, the Director of TAPMI, summarised the evening appreciating the gaming based learning philosophy of Tata Crucible and also applauded the efforts of the teams that came in from as far as Mangalore to be part of the finale.