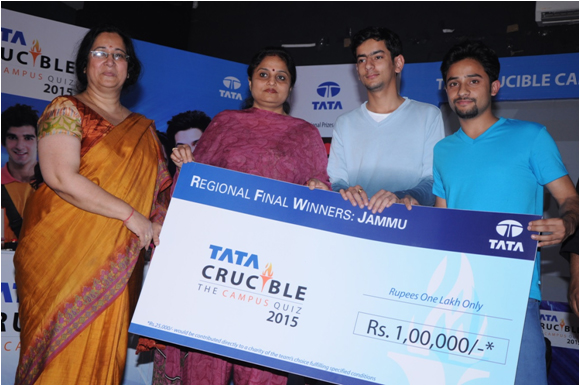 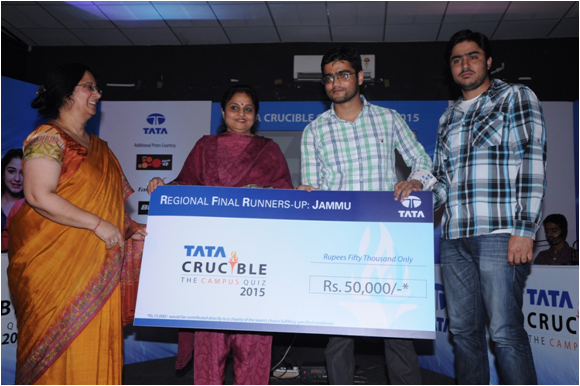 The campus of the Govt. College for Women at Jammu was abuzz in anticipation of the city edition of Tata Crucible. Quizmaster Pickbrain was underway quickly in true businesslike fashion, as he dished out a prelim that was very balanced, covering a wide gamut of topics, that forced the teams to think. The six that made it to the final were:

The final was a wonderful experience for the entire gathering. It began with all teams playing well in the first over and as the quiz moved rapidly from one question to another the duo from MIET were in action cracking the questions, at will.

The seasoned quizmaster was smart to recognise the presence of several first time quizzers in the audience and toned down his questions for them so they could win more prizes. In a rather liberal mood he dished out more than 25 audience questions making everyone happy, as they won handsome goody bags from the Tatas.

In the two segments that followed MIET had amassed a huge lead answering six out of ten straight hits on the buzzer and continued in the same manner to finish as champions, yet again, having won the Jammu edition a year ago. The duo of Bhavik and Ankur from Central University clinched the runner up title.

The champions now move to the northern zonal at Delhi and with the form they seem to be in they sure will fancy their chances to move into the national finale.

The guest of honour was Mrs. Priya Sethi, Minister of State for Information, Education and Culture, Govt. Of Jammu and Kashmir, who advised the youth to study well and use that education to “bring about change and not merely make money”. She was accompanied by the Principal of the host college Dr. Hemla Agarwal.