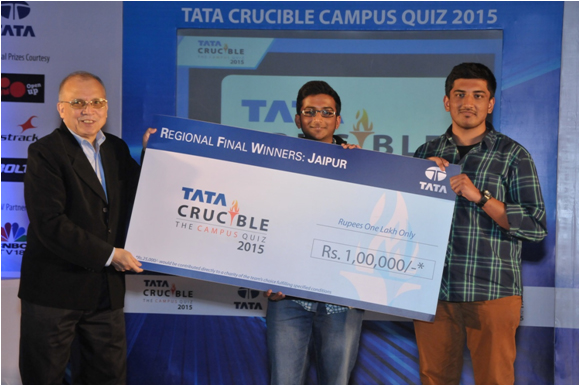 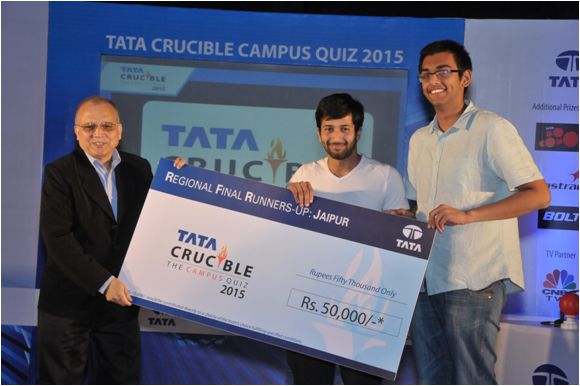 Close to 350 students from college campus’ across Rajasthan thronged the pink city. The battle certainly was beyond Jaipur with teams from Jodhpur, Pilani and many neighbouring towns. Pickbrain started proceedings with a crisp 20 question prelim, and the finalists who made it were:

The business quiz concept which was new to this city barely a few years ago has now become a pitched battle amongst campuses. The final seemed a one sided affair with all LNMIIT racing off to a lead in the early stages. Seasoned quizmaster Pickbrain was at his best as he kept encouraging the teams to crack his posers and learn new things. He also cautioned that anyone could replicate the scored LNMIIT had put on board though many believed the battle was over.

BITS Pilani gave some quality answers but took too many negatives to be able to sustain the score line. It was just past the mid way that the duo from NLU came up with a series of outstanding answers that stumped everyone and silenced the LNMIIT team and their supporters who wondered what was happening.

As the excitement mounted and as the quiz inched to the final round, with NLU still powering their way and with one question remaining they were on the verge of a great victory having caught up with LNMIIT in style. As Pickbrain fired the final salvo the LNMIIT team took the initiative and went for the buzzer bravely and got the answer right to the delight of the audience.

The entire audience though applauded a valiant effort by NLU as they came back to nearly upset the LNMIIT plans and performance. The guest of honour Dr. S. S. Gokhale, Director LNMIIT, congratulated the teams and urged them to use such platforms to learn and sharpen their skills.