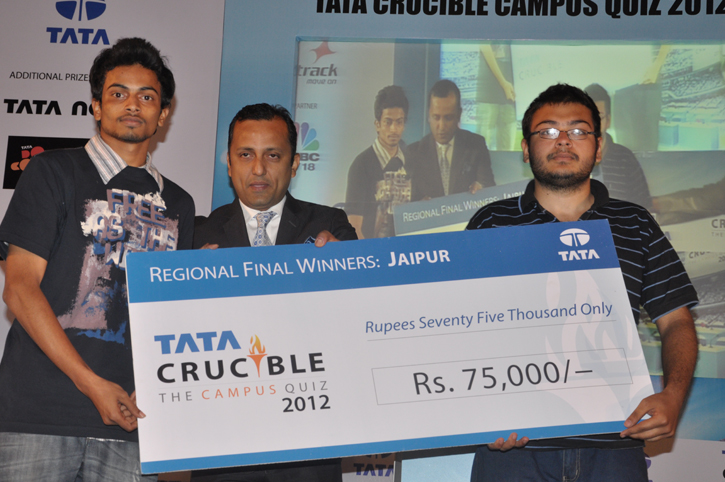 It was an exhilarating afternoon of high voltage quizzing at Jaipur. After a standard prelim of 20 questions, which the teams felt were a trifle easier than the other cities, it came down to the wild card round and then the finals.

The final was a very interesting battle that started with five teams scoring quickly but as the quiz moved into the next couple of rounds it became evident that it was a head to head dual between Gyan Vihar and LNMIIT (Dheeraj and Nikhil).

The battle was so fierce that it seemed like two Kings from the good old days of Rajasthan were in a fight and their tuskers not yielding an inch of space. If the first few rounds went Gyan Vihar’s way, LNMIIT came back in the game and this went on for a couple of rounds of questions.

The deciding moment came in the lateral thinking round when LNMIIT came up with some stunning answers to clinch the title. Gyan Vihar finishing a very credible second and the girls from Bhanasthali came in third with some very good answers towards the end of the quiz.

The guest of honour Mr. Samrat Datta, the GM of Jai Mahal Palace underlined the youth power of India and reflected on how the Tata’s and India were turning to youngsters to power their future.