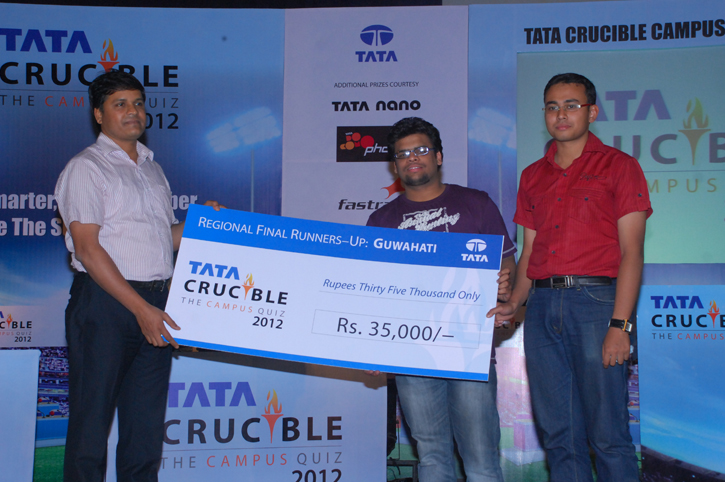 On a day when India and Pakistan were playing a one day international, to expect a hand full of teams for a quiz would be fair. To have a record participation of 198 teams would explain the power and magnetism of a Tata Crucible.

‘It was not only about the teams, it was about the north eastern region making a strong statement about their quizzing credentials and growing stature in business quizzing’, said quizmaster Pickbrain commenting on the final.

The quiz was a tense affair and IIT won it on the final question with GMC and IIM-S right behind. IIM Shillong was the most consistent team winning both the wild card rounds and featuring three teams in the final.

The final was fought with great intensity and passion. The teams did extremely well across all the rounds and the lead positions fluctuated with each passing round ensuring that people in the audience were at the edge of their seats.

It began with the Doctors in the making getting in the lead and were quickly followed by AEC. In the buzzer rounds, IIT-G did extremely well to get into the lead and as the final rounds unfolded IIM-Shillong came back strongly to challenge the teams that were leading.

IIT-G then came up with a telling blow to clinch the quiz as GMC, on the final question got themselves to the runner up slot with a good answer. The guest of honour, Prof. BK Patel the Dean – Student Affairs, IIT Guwahati, gave away the prizes to the teams.