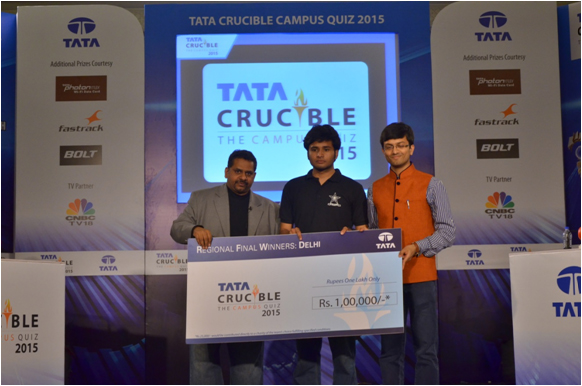 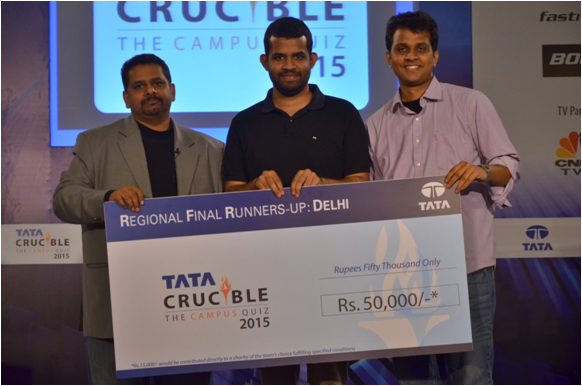 It was the day for the final regional city of Tata Crucible and no less than the national capital. A not so easy prelim set the stage for the afternoon with teams scoring well despite the high benchmark. The finalists who made it were:

The final started with some quick scoring by the Stephen’s duo of Apratim and Mukund while the team of Sarthak and Shashank from NSIT caught on quickly as well. They soon left the other teams behind and what followed was an amazing display of knowledge, strategy, tactic and courage by both these teams.

The two teams battled question after question till the very final one. With one question remaining St. Stephen’s was in the lead by a mere five runs and as Pickbrain took a deep breath to quip “What a final”, it seemed the most apt summary to the quiz.

He continued to belt out the final salvo and the NSIT boys took the risk and went for the buzzer to try and crack what was a tough poser but missed out. St. Stephen’s for their part had answered superbly and deserved the win, their first ever at a Tata Crucible.

The teams walked towards each other and congratulated themselves on a great battle, that drew applause from the audience and an appreciation from the quizmaster who said “That is the kind of spirit you want to see. You want to win a tough, hard fought final but at the end of the day have a heart for the performance of the other”.