Dehradun – UPES inches past at Dehradun 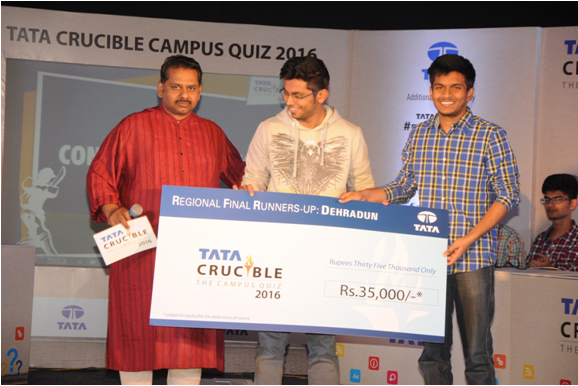 Over 200 students on a cool Sunday afternoon marked the meeting of sharp minds from campuses across the valley of Dehradun. They battled through an interesting prelim hosted by celebrity quizmaster Pickbrain. The finalists who made it from the prelim were:

The final was a four-way battle initially with two IIT teams and one UPES team scoring well. As the questions flowed at a swift pace, so did the answers and soon it was UPES in the lead with the IIM team now trailing them.

The UPES duo of Vishnu and Mudassir then started playing safe and did not take any half chances as they were in the lead. IIT and IIM in the meantime played hard but took negatives, effectively decreasing their chances.

The team from DIT did well in bursts but could not sustain the momentum to challenge the top team. They however had some brave hits in the end to level scores with IIT. However, on a tie breaker they lost to IIT for the runner up title.

The win for UPES may have been narrow and not convincing, but to their credit they played out a sensible game without taking chances. At the end of the day it was a story of ‘All is well that ends well’ for them.