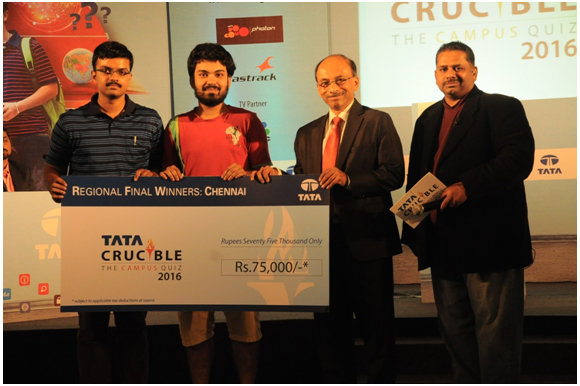 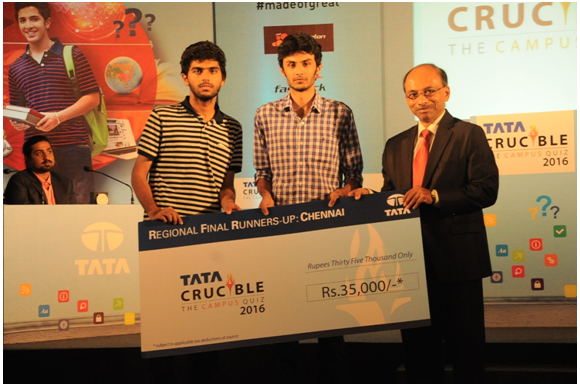 Chennai happens to be one of the big ticket locations for a Tata Crucible since its introduction more than a decade ago. 400 plus teams and the ballroom at the Taj was bursting in its seams. Pickbrain had to manage two prelims to cater to the turnout from which six top teams emerged to take the stage for the finale.

The final started with the IIT teams opening their accounts in quick time while ICAI too were off the mark. Once the early nerves were out of the way, the teams started scoring freely and by the end of the second segment, the IIT duo of Venkat and Rushabh were in the lead followed by ICAI and IIT (Kavin and Shashwat).

The other teams scored in bursts but could not find too many opportunities on the buzzer with these three teams in a neck and neck battle. The IIT duo of Venkat and Rushabh played the rest of the overs with clinical precision to take the crown.

While ICAI was looking set to finish runner up, the duo from SRM upstaged them with three big hits in the final stages to finish second. The excitement of the final even got to the seasoned quizmaster who acknowledged a wrong answer and corrected his decision. The IIT Madras team moved into the zonal to represent Chennai.

The Chief Technology Officer of TCS, Mr. Ananta Krishnan, an avid quizzer himself from his IIT days was the guest of the honour.