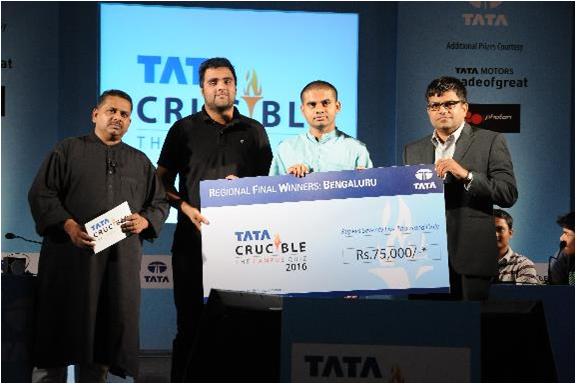 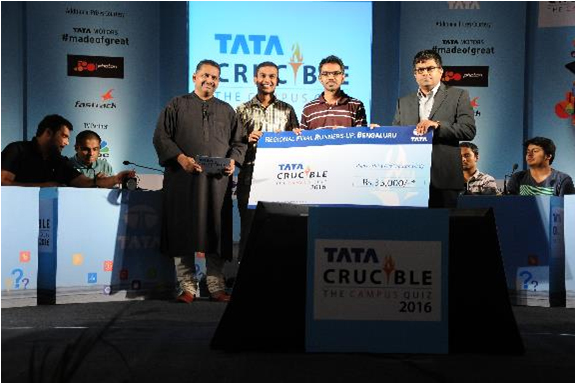 Close to 400 students on a Sunday afternoon were treated to an entertaining edition of Tata Crucible, that went down to the final question. Quizmaster Pickbrain, who hails from Bangalore, appropriately started the quiz in the local language to a thunderous applause, setting the tone for a high energy quiz to follow. After a fast paced prelim, the stage was set for the six teams that made it to the final.

The final was a gripping, tense game from the word go. The duo from NLS got off to an early lead while the young team from Christ University set the stage on fire with some gutsy high value hits, to get going.

The teams from RVCE were always in the fray but could never really find those two or three hits in a row that would take them ahead. BMS and IIM tried their bit but could not sustain the momentum.

In the meantime, the Christ University duo who scored heavily, also lost in equal measure,taking too many half chances. It knocked them down from a good position and it was too late for them to recover. The NLS and RVCE teams were now clearly running the home stretch, with NLS still in the lead and doing nothing wrong.

NLS held out the challenge and earned themselves their first ever title, while RVCE with Nikhil and Sagar, were the runners up. The guest of honour Dr. Arul Shanmugasundaram, CTO – Tata Power, appreciated the quiz and said ‘platforms like this help build a better nation’ while underlining that the Tata’s have always believed in the power of the youth.