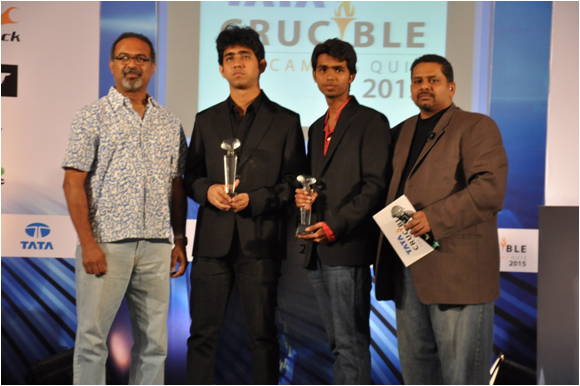 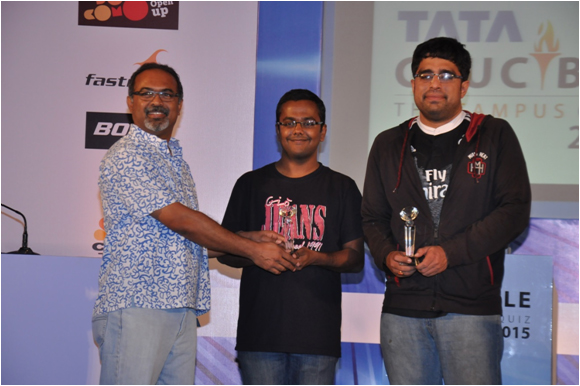 The final zonals for the 2015 edition of Tata Crucible was a tough event given the calibre of the teams that had won from across the region. The zonal finalists were:

The final was a thriller with the team from IIFT Kolkata very similar to their Kolkata round starting with a burst of negative scores prompting the witty quizmaster to quip “Maybe it is their style of quizzing”.

The quiz progressed with KIIT Bhubaneswar featuring the international winners of the 2014 edition trying their best to make headway but in vain. The IIT BHU and VSSUT BURLA teams struck good answers but did not push the buzzer often enough to progress. In the meantime the team from IIFT did make a comeback and caught up with the others teams.

With a couple of good answers across the first half of the quiz, the duo from Gauhati University were now in the lead with Gitam University opening their score line at this stage.

While the Gauhati Univ duo kept calm and held on to their lead, with one final question to go, four teams had a fair chance to win the quiz and as Pickbrain fired the final salvo, the IIFT team took a risk off a rebound from Gitam that paid off and they emerged runner up coming back from being in the negative to winning a slot in the national finale.

The guest of honour Mr. Abraham Stephanos, Executive Director and MD Tata Steel Processing and Distribution, advised the teams to always be on the learning curve and wished them well for their future.