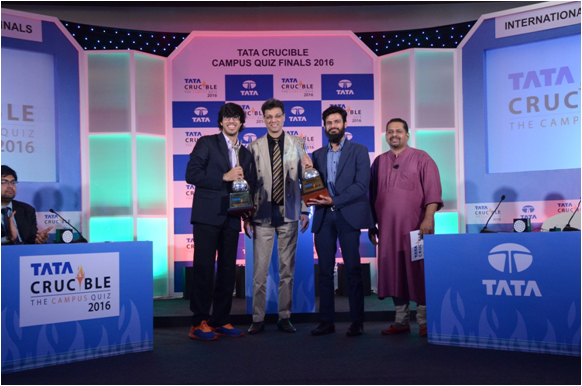 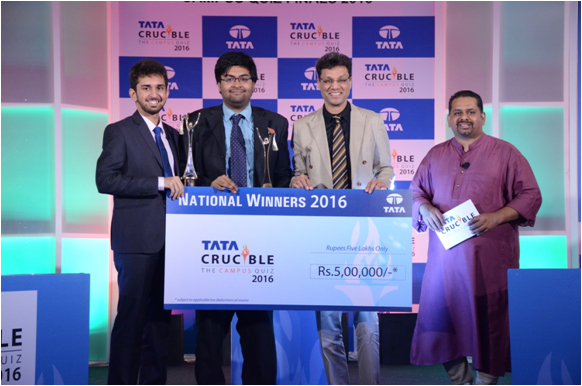 Traversing across 36 cities in India, the 12th edition of Tata Crucible Campus Quiz 2016, concluded with the national and international finals held in Mumbai. The national final was a spectacular show of intellectual quizzing where Abhimanyu Bhadauria and Sreshth Shah from Amity University, Noida, were crowned as the National Champions. Bhushan Patel and Stanny Davis from SEMCOM, Anand, were declared as the runners up of the quiz. The winners and the runners up of the national finals then joined the top two teams from Singapore in the international finals.
In a closely contested competition, Rohan Naidu and Shivam Bharadwaj from National University of Singapore were announced as the International Champions.

The grand finale of the Tata Crucible Campus Quiz was divided into three rounds titled ‘Off the Mark’, ‘Corridor of Uncertainty’ and ‘Time to Zoot’. This year, the format of the quiz was inspired by that of T20 Cricket and required the contestants to display lightning-fast thinking while being quick on the buzzer. The various rounds challenged the participants on their knowledge of topics related to business and required them to display analytical thinking at every stage. While the audience encouraged and cheered for their favourite teams, ace quizmaster Giri Balasubramaniam challenged the contestants to a volley of interesting questions.

The chief guest of the evening, Dr. Nirmalya Kumar, member, Group Executive Council, Tata Sons, felicitated the winning teams. The National Champions were awarded the coveted Tata Crucible Campus Quiz 2016 trophy and a prize money of Rs500,000*. As a special prize this year, Tiago*, the new zippy car from Tata Motors, was also awarded to each member of the national winning team. (*Subject to tax deductions as applicable)