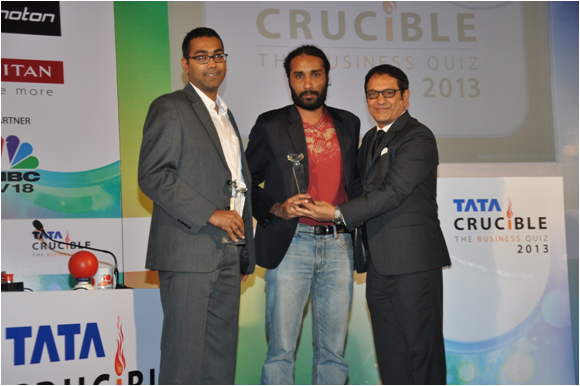 The western interface of the 10th edition of Tata Crucible was a setting that witnessed a couple of veteran teams along a mix of new champions from across the region. Two teams were to be identified to represent Western India in the national finale.

The western interface began with Viacom 18 the Mumbai champions making early ground and leading the fray for the first couple of rounds. It was IBM and Savoir Faire that quickly played catch up while Triton moved closer as well.

It was in the buzzer rounds that followed where Savoir Faire which had a decent lead went for the buzzer on multiple questions and got negatives putting themselves under severe pressure with IBM now leading and closely followed by Viacom 18.

Triton tried to nudge ahead but could not find the momentum. Just when it seemed like Savoir Faire would crash out they came up with an outstanding answer and moved into the second spot putting pressure on Viacom 18. It forced Viacom 18 to go for the buzzer on the final question and as they failed to answer, Savoir Faire were through into the national finale with IBM India.

The guest of honour Mr.PK Mohan Kumar the MD and CEO of Ginger Hotels gave away the prizes and urged the quizmaster to include more questions from the world of cusine and hospitality.