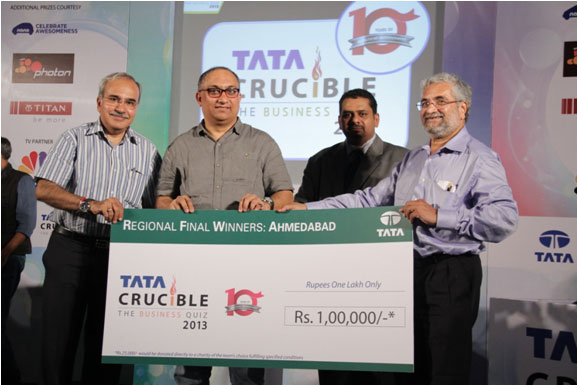 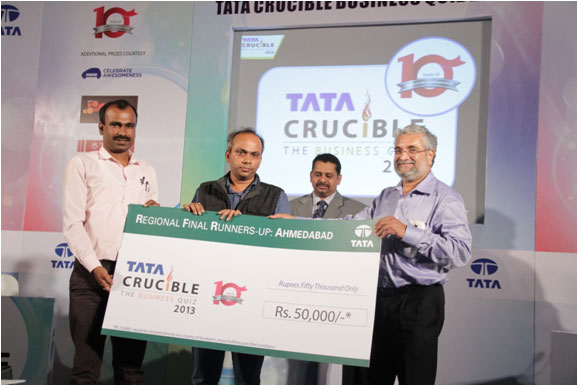 A decade of quizzing was being celebrated and people from all over Gujarat were there at the IIM auditorium with the enthusiasm similar to that of school children waiting for the gates of movie hall to open!. As the quiz began Pickbrain spoke about the new format and led the audience into the prelim which turned out to be a trifle tricky for the teams. The six that made it to the final were:

The quiz began with Triton and Endeavor (the defending champs from 2012) starting quickly and scoring early. The first couple of rounds were sedate and cautious as teams looked a shade tentative. The onset of the buzzers changed the momentum of the quiz as teams started gaining and losing in a hurry.

Endeavor cracked a couple and were in the lead while Petronet score in intervals to stay in the hunt. Triton scored in the next round and closed in on the defending champs and turned on the pressure. Just when it seemed that something would give way, the Endeavor duo went for a couple of half chances and made mistakes that forced them to keep going for the buzzer which all resulted in negatives.

Bharti Airtel and Thermax capitalized on these lapses and moved into second place with Petronet while the seasoned duo from Triton allowed the younger teams to play around and did nothing silly but just stayed calm to win the quiz. In a tie breaker that followed Thermax got the better of the others to finish runner up.

The guest of honour Mr.Hemanth Kulkarni the Head of Tata Motors Sanand plant, drawing from his Indica and Indigo days said “When it is time to create it is a challenge, when it created it is fantastic feeling”. The observation perhaps aptly summarized the quest of Triton, the champs who have never missed a Crucible since its inception.