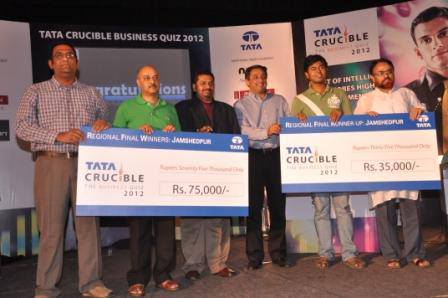 ‘Tata Crucible is always a humbling experience. Its tells all of us how much we don’t know more than how much we know’ quipped Mr. Narendran Vice President, Tata Steel, the guest of honour with a touch of humour as a perfect reflection on the high standards set by the teams on stage at Jamshedpur. A packed auditorium was in rapt attention as Pickbrain thundered with the prelims that led to the following six finalists.

The final started with two teams from Tata Steel getting off to a fast start with all the other teams trying hard to catch up. Midway into the final and it was evidently a two team battle on who would make it to the national final.

The battle moved quickly with these two teams battling for the turf with one another. It all came down to the final couple of questions when Mohit and Nirmal took some half chances and ensured they made it to the national final.

The noteworthy feature of the quiz was the fairly large gathering of school kids from Jamshedpur who answered several questions that even the teams could not.