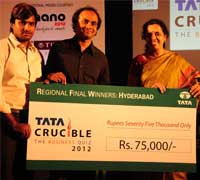 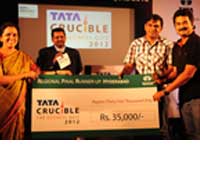 As India was celebrating a Test victory after a long time, on the other side of Hyderabad two youngsters from Sai Mitra Constructions, scripted an epic victory for themselves forcing quizmaster Pickbrain to say “Just yesterday I thought we had found our national champ when they scored 115 at Ahmedabad and barely 24 hours later, I take my words back”.

Over 125 teams took part in the prelim, a tough one at that, before the following six made it to the final.

The finale began with former champions Infosys making good progress as teams from Mahindra Satyam, Standard Chartered and HSBC also got going. All teams looked close to each other but Infosys kept moving ahead till the mid point of the quiz.

The lateral thinking and visual rounds played on the buzzer was the turning point with Naveen and Phani going for leather on every question and cracked a whopping 90 points to take the quiz away from the others. If that was not enough, the duo cracked a few more in the final round to finish with a perfect century.

Infosys finished runner up but the result was indicative of a young brigade of quizzers across India coming better prepared for the Crucible edition to challenge the erstwhile quizzers. The guest of honour Dr.Lakshmi Lingam said “This is an audience that is prepared with answers waiting for the questions to come, rather than classes where we ask the questions and hope to find the answers”.