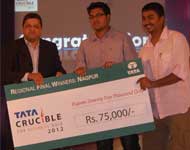 A new era of quizzing seemed to have dawned on Nagpur as young turks took on seasoned campaigners in a battle that saw quizzing from the region benefit the most with greater enthusiasm, participation and energy levels. The six teams that made it to the final were:

The finale was laced with loads of humour, both from the teams and a witty Pickbrain, at his best, leaving the audience in splits appreciating smart retorts and quick wit. In the early rounds of the quiz, Bhilai Steel Plant who have never lost at Nagpur got off to a flying start heading towards a familiar podium finish.

The onset of the buzzers changed the scenario of the quiz with Google deploying a very aggressive strategy to stay neck-to-neck with Bhilai Steel Plant. The other teams did try their bit to surge ahead but could not sustain the momentum. It was only Google that kept at it and finally in the penultimate round got past Bhilai Steel.

Bhilai Steel came back strongly on the final few questions but Google closed the game with some good strikes to emerge champions. The guest of honour Mr. Chaitanya Sathe ,Vice President TCS, congratulated the teams on their display of “knowledge and keenness to learn and stay ahead of the curve”.