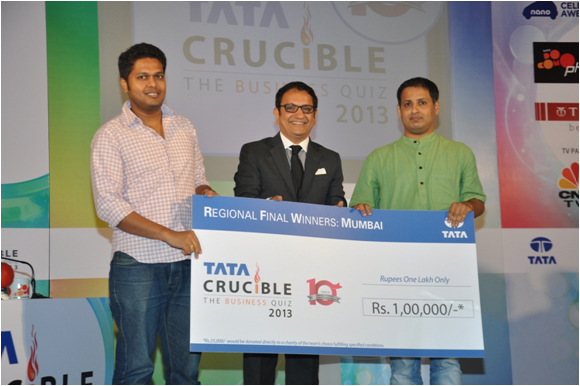 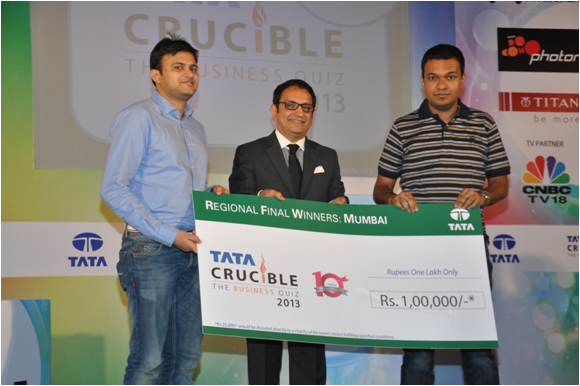 The setting at Taj Lands End was unlike a typical Sunday when people would trudge themselves in for a heavy brunch. This time around it was bright young men and women coming in all set to take on the India’s best know quizmaster at India’s best know business quiz Tata Crucible. A set of 25 questions and the following teams made it to the final.

The Tata track of the quiz had teams battling on an even footing for the first couple of rounds after which the duo of Pravin and Priyamvad (the defending champions) pushed the pedal and marched into the national final with ease. With other teams battling for the second spot the battle was certainly interesting and in the end Ashutosh and Rohit from Tata Capital emerged runner up.

The external track of the quiz was a very different affair from a Mumbai point of view as a lot of new and young teams have arrived n the quizzing scene, as rightly pointed out by Pickbrain as an ‘effect of the large amounts of campus recruitments that happen into Mumbai as a city”. The battle was closely fought between Viacom 18, ING Vysya and Edelweiss. While in the final rounds Viacom did exceedingly well to close the quiz and get into the western zonals, the other two teams fought out a tie breaker enabled ING Vysya to finish runner up.

The guest of honour Mr.PK Mohan Kumar the MD and CEO of Ginger Hotels himself quizzed the audience with a few posers and appreciated their “fantastic performance and sharp thinking”.