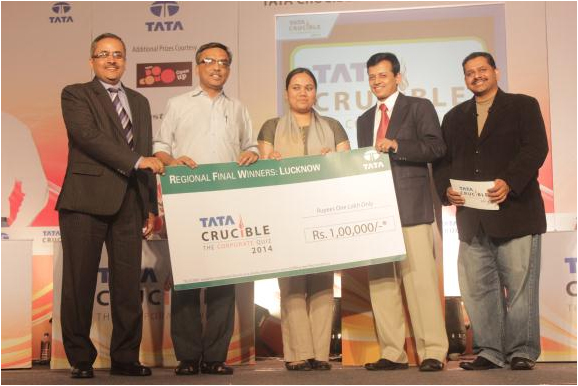 The city of Lucknow set a unique record at Tata Crucible as two Indian Administrative Service (IAS) officers stumped regular corporate teams with some clever thinking and smart answering as they set a record as the first ever IAS officer duo to win at this quiz. Earlier in the evening a quick prelim and a wild card that saw RBI and Tata Motors qualify joined the top four teams from the prelim in the city finale.

The final was a mix of new entrants and regular qualifiers like NTPC and Travelkhana.com. The quiz began with Travelkhana establishing an early lead and putting the pressure on the other teams. The Tata Motors and RBI team did well in bursts could not hold the momentum.

It was in the middle phases that the game began to change as NTPC and the IAS officers also advanced and Travelkhana in their attempt to score a few more ended up crucial negatives that knocked them back. The IAS duo on their part played the game in a prudent manner by not taking too many negatives and option for the buzzer only when they were sure.

After an hour of tense quizzing for the first time in the history of the quiz, two bureaucrats, serving the country, emerged victorious making everyone feel proud at the achievement in what is otherwise a typical corporate quiz. NTPC in the meantime had recovered ground to cross Travelkhana and emerge runner up.

The guest of honour Mr.Parthasarathi Sen Sharma (IAS), Secretary to the UP CM, Mr.Akhilesh Yadav was happy to appreciate the teams and especially happy that his colleagues had won the quiz. Mr.Jayant Krishna, Head TCS Lucknow accompanied the guest.

The two IAS officers will battle for a place in the national final from the northern zonals at Delhi.