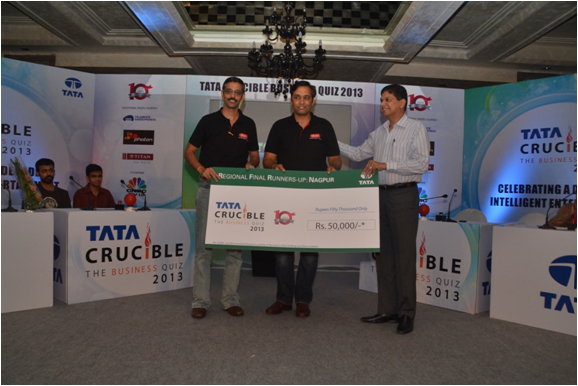 Over 60 teams on a working week day was amply evidence of the passion for Tata Crucible at Nagpur, a city where barely a few years ago business quizzing was unheard of. The afternoon began with a volley of questions in the prelim from Pickbrain which teams found both tricky and tougher than a year ago. The Nagpur teams were cheerful about the fact that Raipur was now a separate city and those teams would not be here to compete. The finalists were:

The early rounds of quiz were slow as teams were very tentative and looked tense as well. They slowly warmed up to the quiz in the visual rounds as the duo from Infocepts built up a good early lead over the others.

It took the next couple of rounds for the duo of Parag and Ranjit from Think Consulting to inch their way back into the quiz with some really good answers. Their colleagues Amit and Rohit also kept trying but missed a few that they should have cracked and were not able to catch up post that. All the other teams tried in parts to move on but it was really a battle between a solid Infocepts and a cheerful Think Consultants. At the end of the grueling final, the young duo from Infocepts made it to the Western zonals with Think just five points behind them as runner up.

The guest of honour Mr.Devendra Pathak, a prominent person from the VED Council (Vidarbha Economic Development) applauded the teams for the sterling performances and urged them to go beyond the regional level to the nationals.