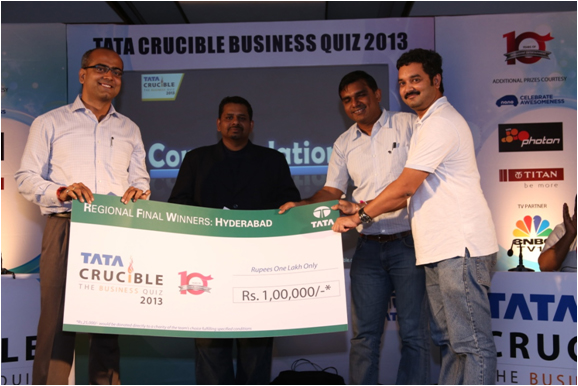 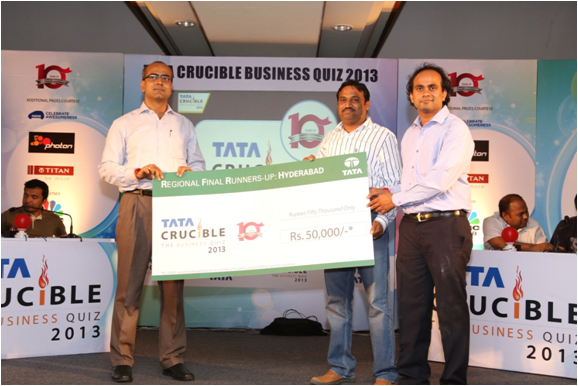 Over 300 people in the audience and the Taj was abuzz in anticipation of the 10th edition of Crucible. Teams were seen speculating if quizmaster Pickbrain would come in true Hyderabadi style in a sherwani but as the lights went dim and music went up, in he walked with a turtle neck and a sleek blazer to thunder a series of questions that made teams think and think again. The finalists were:

The finale began with Novartis and defending champions Sai Mitra starting out quickly but Infy and Google were fast to catch up as the rounds moved from the one to another. A couple of questions were so well crafted that it passed all the teams on stage only to be cracked by someone in the audience.

The round on Tatas was where Infy played aggressive and drew level with Novartis the leaders. Right behind them were Sai Mitra and Google, the quiz was heading for a cliffhanger. In the rounds that followed Google could not find the momentum and it was upto the top three to battle it out. At this juncture Infy came up with two back to back strikes that took them to the top slot. Sai Mitra by then leveled scores with Novartis and on the final question won the runner up title.

The guest of honour Mr.Sarajit Jha COO of Tata Business Support Services applauded the teams and said “With talent like this I am always optimistic and bullish about the future of India. We have problems but we have got to be positive and move ahead”, he added.