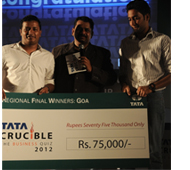 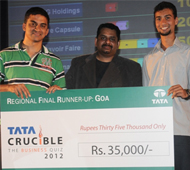 “The Federers of Goa quizzing have been conquered” exclaimed quizmaster Pickbrain aptly describing the remarkable feat achieved by Lotus Landmarks defeating Savoir Faire, a team that had never lost at Goa. A good prelim led to the following teams.

The final started with all teams battling on an even platform. Splash and Creative Capsule moved ahead with the rounds as Savoir Faire and Lotus Landmarks also in the hunt as the quiz moved into the buzzer rounds. As the round moved from one to another the teams started closing in and playing it by the round. It then became a three team battle with Splash, Savoir Faire and Lotus Landmarks going neck and neck into the final rounds of the quiz.

As the quiz moved from question to question, the battle tightened and it seemed like a replay of a year ago with Savoir Faire and Lotus Landmarks at logger heads. Savoir Faire took the initiative and risk to move ahead but the young duo from Belgaum were up to it, measure for measure and the quiz reached the final question.

The final question was the decider which Lotus Landmarks went for taking a half chance and sailed into the national final, upsetting a former national champion of the quiz and a solid team from Splash that would also believe they had a great chance to win.

The Savoir Faire team were very graceful in stating “They could have done it last year, they did it now”. For the new champions this was like a dream come true.