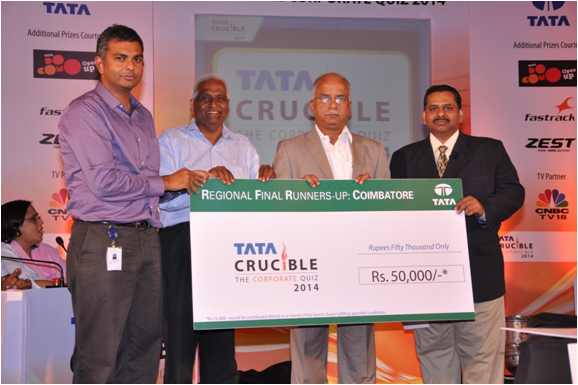 The city of Coimbatore has always been enthusiastic about a Tata Crucible coming to the city. This time the fervour had extended to the school kids with many of them walking in to be part of a corporate event. The prelim was snappy and fast leading to the finals.

The final line up featured several regular teams, all challenging the mighty Chennai Silks who have been invincible over the last couple of years in this city. As the quiz started and moved into the first couple of questions the defending champions were blazing their way through.

From there it was either a call for the other teams to chase down Chennai Silks or battle for the second spot. It soon became the latter and that sure was an engrossing one. With Brookefields, MSJ & V, Khumbat and Bharat Petroleum, all trying to outscore the other, many a risk was taken resulting in great excitement. At the end of a day it was Brookefields that emerged runner-up this year.

The guest of honour Mr.Jayaramakrishnan, Consultant TCS, was witty summarising the quiz as he said “While the key for us would be to learn to channelize this ability to find solutions into real life, from my end at quizzes, I normally look at how much I scored. Today, I should not do that”.

Chennai Silks will now progress to the South Zone final and look to moving into the nationals yet again from there.