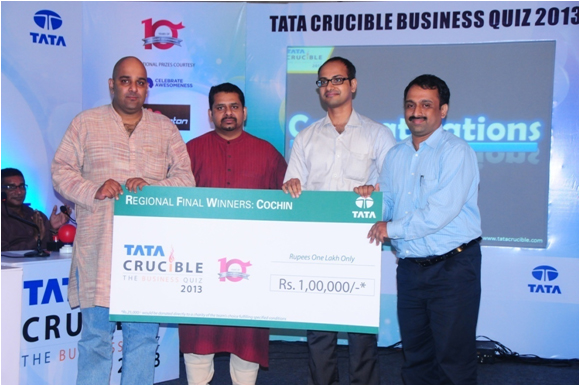 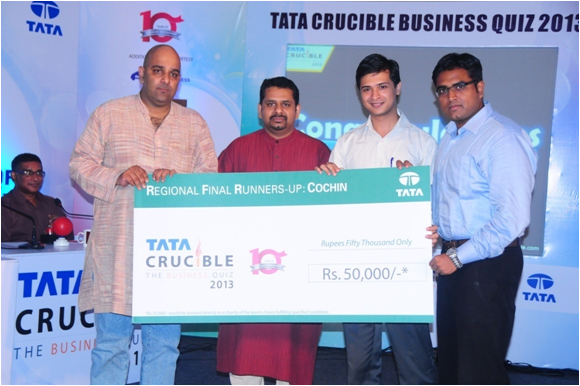 A quite evening with a chill breeze after a heavy downpour on the Waterfront of the Taj Gateway at Kochi sounds too romantic for a quiz setting but that is exactly how it was as team trickled in from all over the city for 10th edition of Tata Crucible here. Pickbrain started the evening with a 20 question prelim from which the following teams made it to the final.

The final started with nearly all teams getting off the blocks early and into the first couple of rounds barely 10 points separated all six of them indicating a very tight contest. The onset of the buzzer with the round on Tata’s did not ruffle the equation either as teams stayed in a clutter.

The Cryptic thinking round, a trademark of quizmaster Pickbrain was the point of inflection, a Malayala Manorama thundered their way with four consecutive strikes in a manner that left the opponents and the audience spellbound. It even attracted a comment from the quizmaster that no team in India has cracked all questions in this round the way these two did. That burst of brilliance coupled to their earlier scores was sufficient to take them into the zonal round. In a tight battle for the second place, the duo from Federal Bank did well in the final phases to ensure they finished runner up.

Pickbrain then threw a surprise on everyone by inviting Mr.Ramdas who was in the audience from London to join him on stage to give the prizes. Mr.Ramdas happens to be the first ever Tata Crucible champion who had then flown in from London won the quiz and flew back. It surely was a befitting recognition of the first champion.