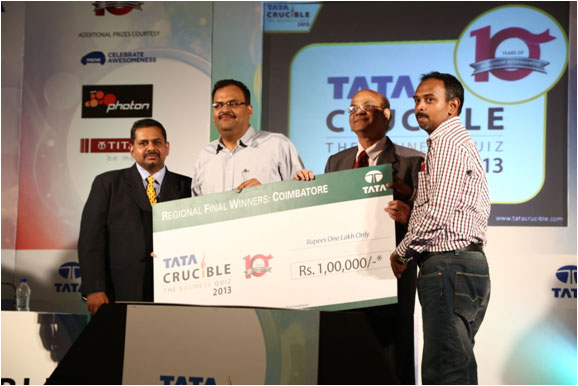 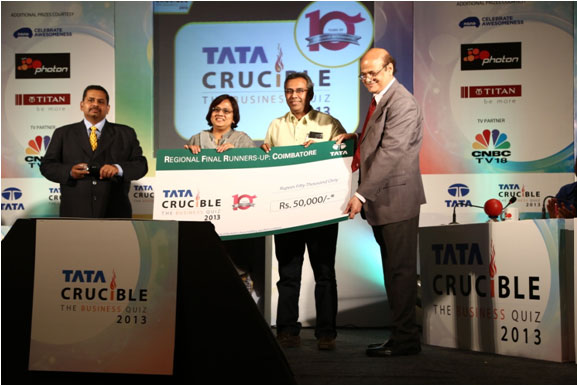 The air was filled with excitement and nostalgia for the tenth edition of Tata Crucible to unfold. With over 70 teams turning out for the quiz it was a reflection on the growing stature of the event across India. At the stroke of 6pm the lights went up with the music. In walked quizmaster Pickbrain and almost instantly took control of all of us at the venue with his wit, charm and enthusiasm. A crisp few words about a decade gone by was all that was in store as he moved straight to the quiz in a very businesslike approach. A 25 question prelim led to the following finalists.

The final started as if scripted for a movie with the current national defending champions Chennai Silks opening the scoring on a pass from the KCT professors. However as the quiz moved into the first couple of rounds it was the duo from Brookefields that zoomed ahead of the rest. Just when it seemed that pressure had perhaps caught up with the champions they unleashed an array of answers to get past all the teams and to a healthy lead.

As the quiz moved along at a brisk pace, the professors from Karunya also scored as did the Kumbhat duo and the battle got interesting. Chennai Silks however was now way ahead of the rest and retained the title. In the rounds that followed the Kumbhat team scored successively on the buzzer and got within striking distance of Brookefields.

In the final round it was a tense battle for the second spot and Kumbhat inched past Brookefields on the very last question, to clinch the runner up title. The champions Chennai Silks moved into the zonal rounds at Bangalore. The guest of honour was Mr.Sudhir Sharma , Senior Vice President, Voltas who advised the audience that “The most complicated thing in life is to keep like simple, but if you do keep it simple then life will pose little complications” before giving away the prizes.