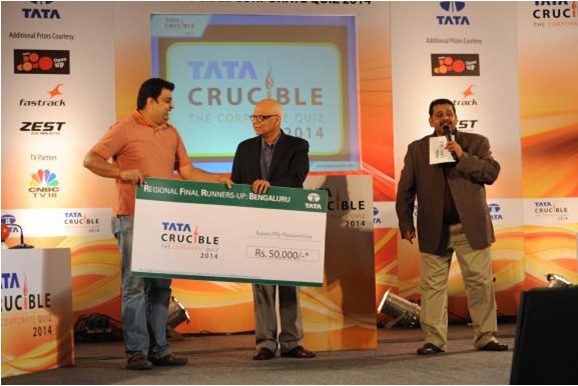 Over 140 teams and the Ritz Carlton was packed to the last seat on a cloudy Sunday afternoon as a tough set of 20 questions set the tone for what would be an afternoon of exhilarating quizzing. The finalists who made it were:

The final was pulsating and tense as teams started with great intent working tough posers with great thought. Soon the quiz drifted into a two way battle between Oracle and IAME (a management institute). It kept swinging from one team to the other as they battled one question at a time.

Nothing would change over the next 30 minutes and on the finale question with nothing separating both the teams Oracle went for the buzzer even as the seasoned quizmaster was reading the question and an unforced negative saw them crashing out.

IAME on their part took absolutely no negatives as they went about in a clinical manner marching into the south zonals.

The guest of honour, Mr.Madhukar Dev, CEO and MD, Tata Elxsi gave away the prizes