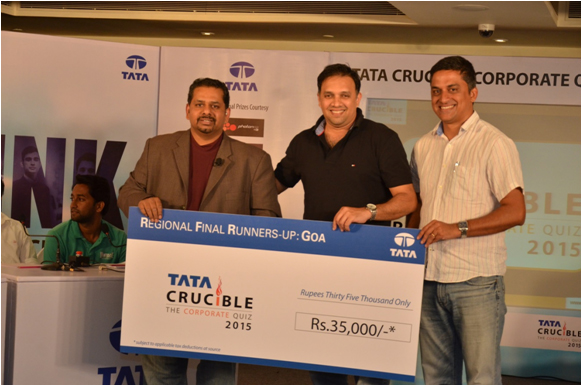 ‘Fun can be serious business at Goa’, is something one would have understood had they been witness to the city’s edition of Tata Crucible. High intensity, deep passion and sincere appreciation of good quizzing irrespective of the team that cracked the posers marked the quiz. Pickbrain started the proceedings with a brisk 20 question prelim that led to the six finalists.

The final was entertaining, quick and gripping as all teams started off well and kept scoring at regular intervals. It was in the second phase of the quiz that it seemed like yet another Savoir Faire victory but soon enough the teams from Adicent and Prototyze closed in on them to keep the quiz wide open.

The teams from Acron also tried to move ahead but despite some good answers could not get into the top two. Adicent and Prototyze would not let go easily as they took calculated risks and scored at the right time. Savoir Faire on its part played too safe and allowed the pressure to build up to the final questions.

Some brave attempts by Adicent provided them the impetus to get past Savoir Faire and in the end pull off a memorable upset at Goa. They now represent Goa in the West Zone final, at Mumbai.