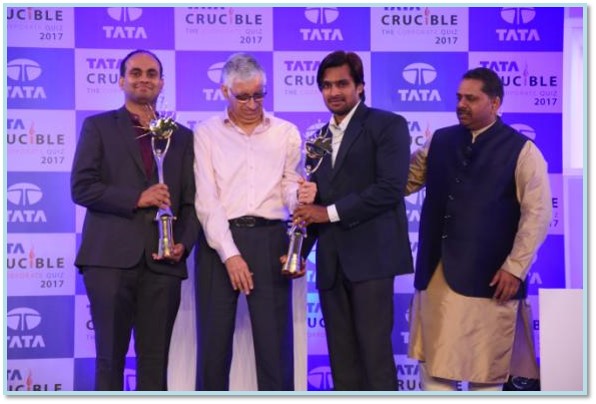 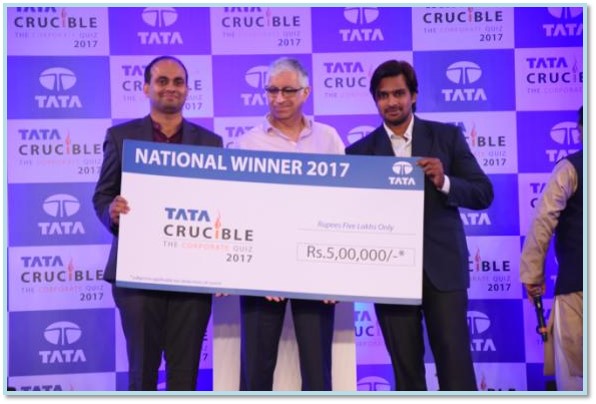 A knowledge initiative by the Tata group, Tata Crucible serves as an ideal platform for young minds to showcase their quizzing acumen, thereby setting benchmarks for knowledge quotient in the industry. Spread across the length and breadth of the country, covering metros and tier II and III cities, this year the quiz witnessed participation from more than 1300 corporate teams. The chief guest for the evening, Mr. F N Subedar, Chairman, Tata Services Limited felicitated the winning teams. Congratulating the winners at the venue, Mr. F N Subedar, commented, “It was a pleasure to see what was started by Mr. Gopalakrishnan evolve so much and so beautifully over the last 14 years. The Tata Crucible Corporate Quiz is a perfect reflection of the brightness of youth today. The contestants were so driven in their preparation and performance. That clearly came forward in today’s event.”

Brimming with happiness, the winners of the Tata Crucible Corporate Quiz shared anecdotes about their exciting journey to the finale. Talking about his moment of glory, Naveen Kumar said, “The strategy I used this year was to attempt every question and get the maximum opportunities to score. This is my seventh year at the Tata Crucible and it has taken me seven years to achieve this win. I love quizzing and winning at the Tata Crucible was always my passion. I think this is a brilliant initiative by the Tatas and I hope they will continue this going forward.” Echoing his teammate’s sentiments, Phani Mahesh said, “We have been relentlessly trying to win the Tata Crucible Corporate Quiz for years. Minor mistakes had prevented our win before. We had resolved to stay calm because teams lose points otherwise. India has a major youth population and this is the best initiative of its kind that encourages youngsters to pursue something valuable.”

The Tata Crucible Corporate Quiz 2017 format was based on the concept of ‘Real Time Strategy’ with an aim to create a simulation of the fast-paced environment, businesses operate in. It comprised contemporary gaming concepts, along with an invigorating set of rounds that required decision making and strategy as the key factors for winning the coveted title. The regional round was held across 25 cities, spread across four zones. The winners from the regional rounds competed in the zonal finals and the top two teams from each Zonal final were invited to participate in the national finals. The cities where the quiz was conducted included New Delhi, Chandigarh, Electronic City (Bengaluru), Gurgaon, Jaipur, Indore, Ghaziabad-Noida, Kolkata, Visakhapatnam, Guwahati, Bhubaneswar, Raipur, Jamshedpur, Mumbai, Pune, Nagpur, Goa, Ahmedabad, Navi Mumbai, Chennai, Bengaluru, Thiruvananthapuram, Coimbatore, Kochi, and Hyderabad.

Renowned quizmaster Giri Balasubramaniam, popularly known as ‘Pickbrain’, hosted the competition in his inimitable style of presenting trivia dovetailed with wit and humour. There was also a special round of three questions conducted by Mr. Harish Bhat, Brand Custodian, Tata Sons. With each edition, the Tata Crucible Corporate Quiz raises the bar of quizzing and the national finale of the 14th edition took it up a notch. It was an evening where grit, determination and strategic thinking were put to test. The finale was dominated by the winners, Sai Mitra Constructions, who went blazing on the buzzer right from the word go and scored high points in the initial rounds itself. The team from Edelweiss and Tata Consultancy Services tried catching up in the later rounds, but with a whopping score of 1350, Sai Mitra Constructions was securely placed in the top position.

The final question of the evening was a perfect tribute to former President Late Dr. APJ Abdul Kalam on the day of his birth anniversary. Few questions from the National Finals were:

The eight teams that qualified in the finals were

The hackathon was divided into four zonal events, held at Hyderabad on September 24, 2017, Kolkata on October 7, 2017, Delhi on October 8, 2017 and in Mumbai on October 14, 2017. The first edition of the Tata Crucible Hackathon received innovative and interesting solutions to the challenges. The prizes for this year’s quiz were supported by Tata Motors and the Jaago Re campaign by Tata Global Beverages.