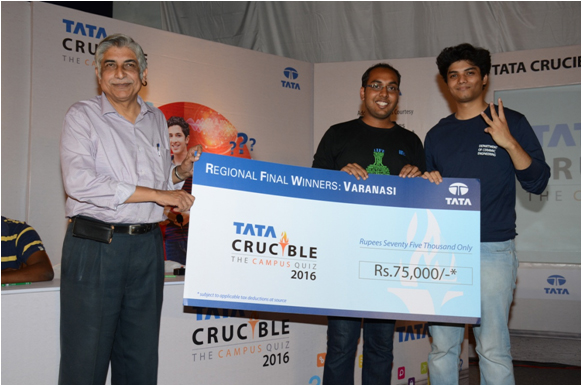 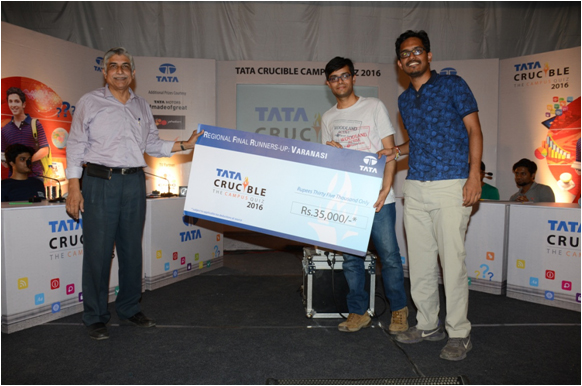 Over 300 students, and the hall was full to its capacity well before the prelim. It underlined the interest and popularity of the quiz in this city. Teams from Varanasi and Allahabad constituted the majority of the contestants. Pickbrain walked in to a warm welcome and he was soon down to business throwing his posers in the prelim. Six teams made it to the final.

The final was an all IIT, NIT affair with three teams each qualifying on stage. The initial over belonged to IIT BHU with teams scoring quickly, as the NIT teams took their time to settle in. From the IITs it was Aditya and Ashwin who led the way while Adhityan and Ashlesh gave them a run for their money, before losing out on the buzzers with some negatives.

In the late half of the second segment, the duo of Aditya and Aakash from NIT started moving ahead with good strikes. They kept a good tempo and were soon catching up with the IIT team of Aditya and Ashwin.As the quiz moved to the final question, NIT were on the verge of upsetting the IIT duo, but the latter held out the challenge to win the title.

Prof. Mukherjee, Dean – Student Affairs, IIT BHU, gave away the prizes and appreciated the teams for their amazing speed of reaction and ability to absorb questions. He also applauded their wide span of knowledge while thanking the quizmaster for making their campus a location for the quiz and gracing the occasion.