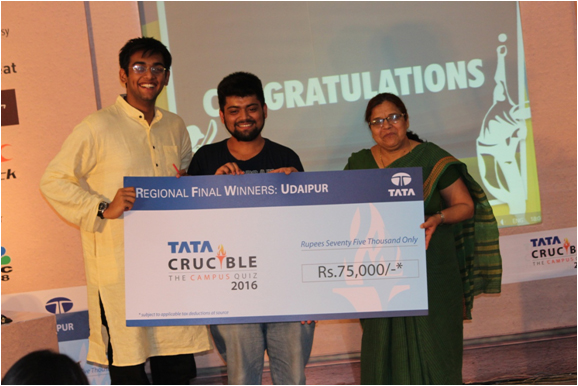 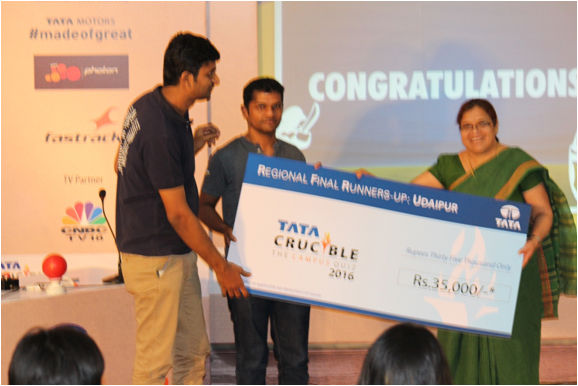 The historic city of Udaipur was abuzz and rightfully so. It was the debut of a Tata Crucible in this city, that has always travelled to other cities to be part of this event. The enthusiasm resulted in a problem of plenty as ace quizmaster Pickbrain had to conduct two separate prelims given the overwhelming response to the quiz. The first ever finalists at Udaipur were:

The final was a very close battle as most teams were gutsy and went for the buzzer showing no fear for negative scores. The IIM teams set the tone and went quickly into the lead. The NLU duo gained ground and kept scoring in quick succession while the other teams made some gains slowly but lost out on negatives too.

In the second phase of the quiz the IIM teams of Anand, Sanish and Piyush Bipin played brilliant especially on some really tough posers but could not catch up with a very well prepared NLU, that moved from strength to strength.

The duo of Anand and Sanish held their own to finish runner up while Sanjay and Rajendra from NLU Jodhpur were crowned the first ever champions from this historic city.

The guest of honour Ms. Farida Shah, Dean MLS University appreciated the Tataâ€™s for bringing the quiz to the city and was impressed with the performance of the teams in their first edition.