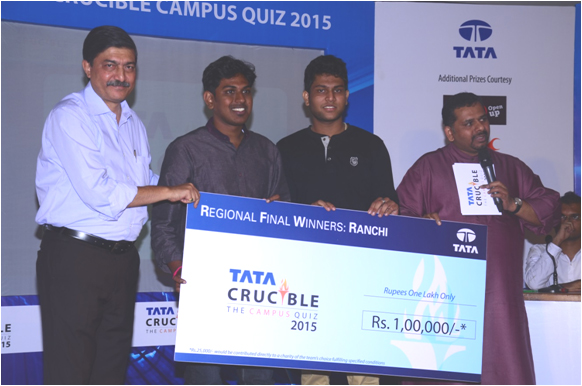 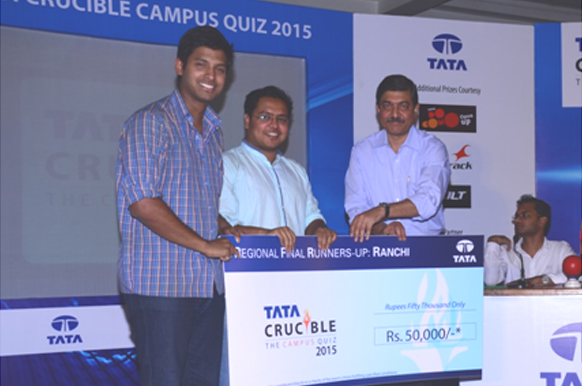 In the terrain where JN Tata left his imprint decades ago, the Tata’s celebrated his birth anniversary with the Ranchi edition of the quiz. Youngsters from all over the state where present on the occasion. Quizmaster Pickbrain came armed with a balanced prelim of 20 questions from which he arrived at his final six teams.

The final was electrifying with the defending champs from NIT launching themselves into the lead and then following it with too many negatives that pushed them back too soon. The prudent duo from IIM Ranchi played the game well but seemed shy to go for the buzzer even when they knew answers, a folly that cost them the final eventually.

The other teams from VSSUT and BIT Mesra scored in bursts to stay in the hunt. The quiz quickly progressed past the ‘middle overs’ into the final ‘slog over’ where it seemed like a battle between NIT and IIM. This is where the VSSUT team took some risks and scored enough to stay within striking distance of the IIM team which was still holding on to its lead.

On the final question the defending champions Nishanth and Wasim went for the kill and missed out while VSSUT seized the opportunity and went for the final salvo on a ‘power play’ to clinch the quiz and the title for the first time.

The entire audience erupted in applause on a fantastic victory and an outstanding quiz. The guest of honour Mr. Satish Singh, Chief Resident Officer, Tata Steel Ranchi, said it is wonderful to see the ‘benchmark being raised each year’ and said ‘It was befitting that the Ranchi edition was on JN Tata’s birthday’.