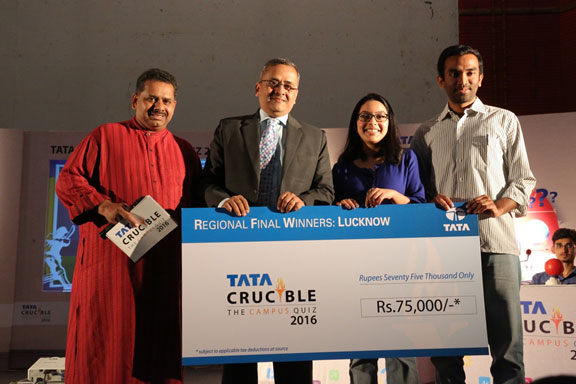 Close to 400 students from colleges across UP from places as far as Nainital, were part of the city edition of the Tata Crucible. It is also a city that attracts large crowds and Is known for its good quizzing institutions. The prelim did not seem a daunting task for the pros, while the new comers got to terms with what a national level business quiz constituted.

The quiz got underway as Pickbrain walked in belt out 20 questions from his armoury. The six that made it to the final were:

The final was a very tight, low scoring affair. The contest between all the teams was close. If Pratyush and Sowmya were leading early on, it was Shubham and Arnab for a while and then Utsav and Suyash were in the lead.

However, all of them took their share of negatives and that made the quiz very interesting with five teams in with a fair chance to win in the last two questions. It was however the duo of Pratyush and Sowmya who held their own to prevail as champions while Utsav and Suyash finished runner up.

The guest of honour Mr. Jayanth Krishna, MD and CEO of NSDC appreciated the teams and said ‘It is fabulous to see such talent’ and felt very positive about the future of the country with such youngsters.