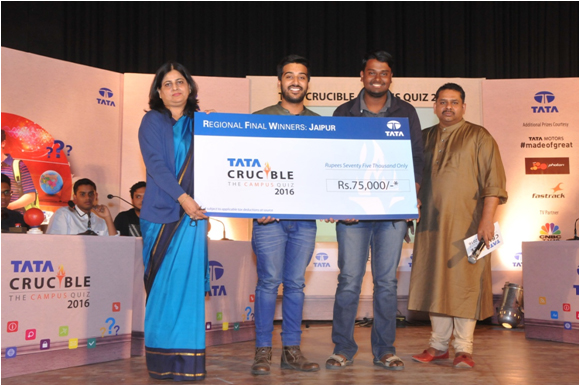 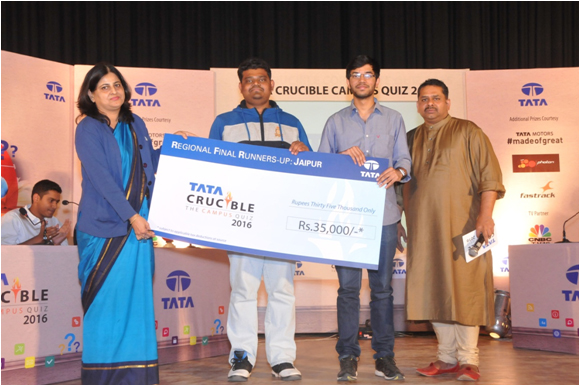 It was a windy afternoon, very pleasant and a comfortable, ideal climate for a good game of cricket. The excitement outside the venue was similar to what one sees at a stadium. Close to 600 students from across the state of Rajasthan were there for the city edition of Tata Crucible. There was a distinct buzz in the air as quizmaster Pickbrain took the stage to unfold his questions.

The finale was akin to a T20 match. It had a lot of twists and turns as all the teams did well to keep pace with each other. In the early phases of the match it was MNIT and LNMIIT with Mrinal and Annanya at the top end of the fray while the other teams were catching up.

As the quiz progressed there were good answers at a frequent consistency by the duo from the Univ. of Rajasthan that kept them in the hunt. Mrinal and Annanyadid well to stay ahead and then held on to their lead with some mature quizzing to clinch the title.

The MNIT duo in their earnest effort to win the quiz lost a few on the buzzer to give the other LNMIIT team a chance to come back. They did not miss the opportunity as they craftily answered a few tough posers to win the runner up title. The Univ. of Rajasthan team did make some valiant attempts to bounce back but it was a little too late for them to impact the outcome of the quiz.

The guest of honour was Dr. Manju Dhariwal, Dean Academic Affairs, LNMIIT who appreciated the quiz and urged the youngsters to make use of such platforms to widen their horizons.