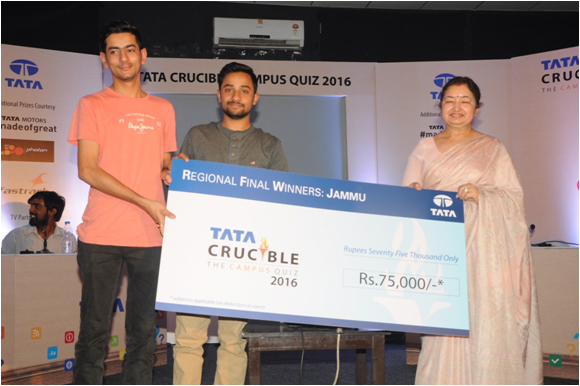 The city of Jammu has always been enthusiastic about a Tata Crucible coming to the city. This time the fervour had extended to teams from Srinagar who travelled to be part of the quiz. The prelim was snappy and fast leading to the finalists.

However, in the second segment MIET changed gears and moved way ahead of the rest of the teams with superb answers and clever power play deployments. From there on, it was either a call for the other teams to chase down MIET or battle for the second spot.

It soon became the latter and that sure was an engrossing one with teams trying to outscore the other, many a risk were taken resulting in great excitement. At the end of the day, it was Vaishno Devi University that emerged runner up. MIET completed a hat-trick of wins to move into the next phase.

The guest of honour was Dr. Renu Goswami, Principal, Govt. College of Woman.