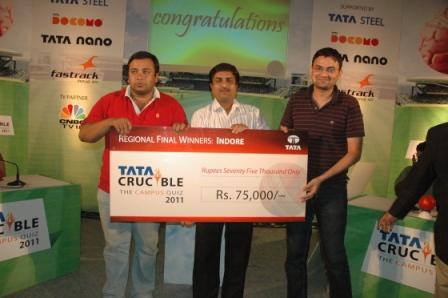 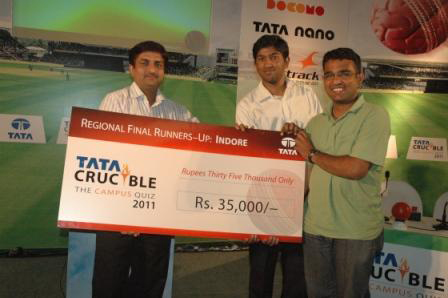 When Tata Crucible first came into Indore barely 40 teams took part, today we have 300 more than that 40 observed quizmaster Pickbrain who has been very passionate about the small cities doing well at a business quiz. A relatively tougher prelim saw the following teams make it to the final.

The game started with teams on a very cautious note with teams playing very tentatively as the first couple of overs went by. Interestingly, Indore became the first city to not use a power play at all as teams chose not to flirt with the negatives.

The buzzer rounds that followed witnessed Shivpriya and Sreevasthava of IIM and Rahul and Soumya Shankar also from IIM picking momentum as NIT Bhopal and UIT also joined in with a few good hits.

In the final overs Rahul and Soumya Shankar consolidated and then did nothing silly to ensure they register a place in the national final. Shivpriya and Sreevasthava of IIM were well in sight of the second place but playing the cautious game for too long resulted in NIT Bhopal playing some gutsy strokes in the final over to get past IIM as the runner up to provide a thrilling finish to a great afternoon of quizzing.