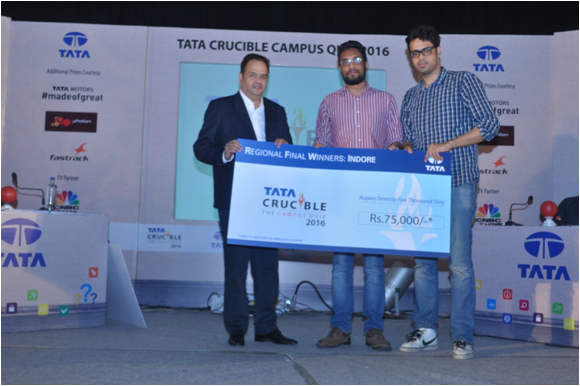 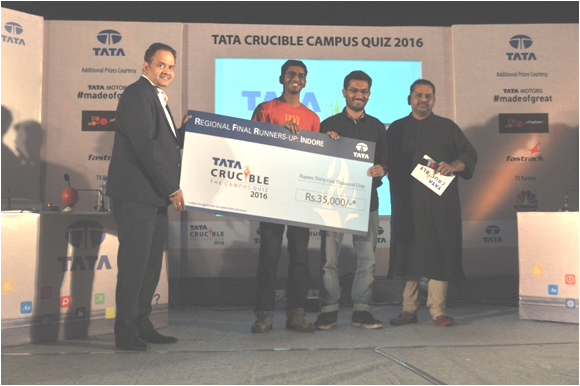 Over 600 students and the hall was abuzz at Indore. The air of anticipation turned tense as quizmaster Pickbrain walked in to belt out a series of questions in the prelim. While some found it difficult many felt they had a fair chance of making it to the finale. The six teams that progressed to the final were:

The final started with IIM represented by Avijeet and Tamarish blazing away to a rapid start. They not only had good answers but backed it with gutsy power play calls that helped them maximise the scores. Soon enough they were well ahead of the rest and started playing carefully to not take negatives and registered an emphatic win.

Ameya and Deepti, the previous year’s champion team, were undress tremendous pressure and found themselves on the wrong foot with a couple of questions that got them into the negatives. It was perhaps their ‘worst day in a quiz’ observed Pickbrain as they could just not get themselves to fire.

The IIT duo of Anirudh and Varadplayed with great pragmatism to score early on and then ensured they only hit the buzzer when they were absolutely sure of the answer. In the process they did not take risks to chase the winners but played within themselves to ensure no one challenged them for the runner up place.

The guest of honour was Mr. Mohan, Global Head, Leather Products at Tata international appreciated all the teams and spoke of how seniors like him required ‘reverse learning’ with so much to learn from youngsters these days.