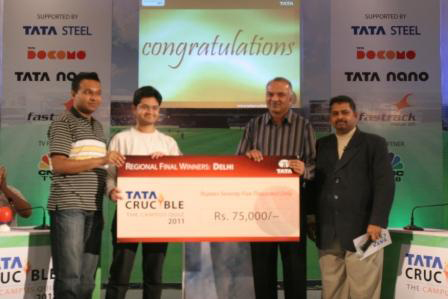 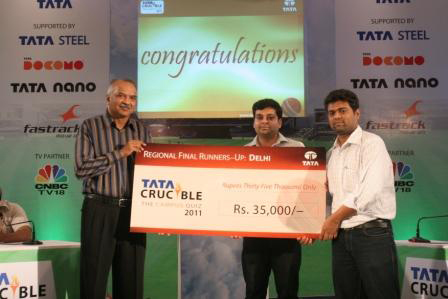 Delhi lived up to its reputation of being a fantastic business quizzing city. Over 300 teams thronged the venue on a Sunday afternoon as a volley of interesting questions set the tone for the afternoon.

The final witnessed one of the closest battles seen so far on the campus circuit as teams scored at regular intervals in the first couple of overs. This in many ways set the tone for the remaining overs of the quiz. IIFT led the quiz in the initial overs with FMS (Ahmad and Siddhartha) and IMT (Sminesh and Jose) behind them.

The buzzer rounds created some differentiation as FMS (Ahmad and Siddhartha) moved past IIFT to lead into the final overs while IMT (Vivek and Rajat) started closing in on the others. The final over saw Ahmad and Siddhartha hold on to their nerve and emerge Delhi champs while a final ball super six ensured Vivek and Rajat would pip IIFT to the runner up post by a margin of just 3 runs.

The chief guest Mr.Sanjay Singh gave away the prizes and inspired the youngsters to follow good value and be a Tata (in values) even if they were not part of the Tata.