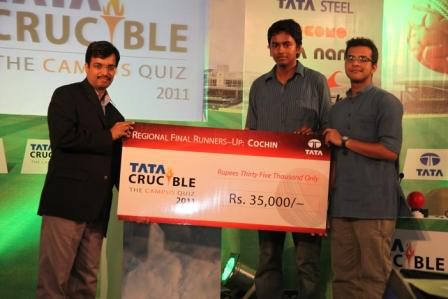 Brilliant. Nail Biting. Last Ball Thriller are all adjectives that would aptly summarise the Kochi final of Tata Crucible. A balanced prelim witnessed teams scoring high to qualify into the final.

The final began with Nirmala College, COE TVM, CUSAT and DC all scoring early runs to indicate that the battle would be a tight one. As the second over of the game unfolded, NIT-Calicut displayed some fireworks setting up a thriller.

The next couple of overs witnessed a steady progress by COE TVM, while CUSAT did well to gain a few runs. This is where the teams from NIT, DC and Nirmala lost out as they tried to push the scoring rate.

In the final over, the game went to the last ball with CUSAT leading COE-TVM by 5 runs but a brilliant final ball super six took the latter into the national final. NIT despite a good show had to settle for the third slot. It certainly was a huge relief for Sudharshan and Unnikrishnan who had finished runner up a year ago, to march into the national final.