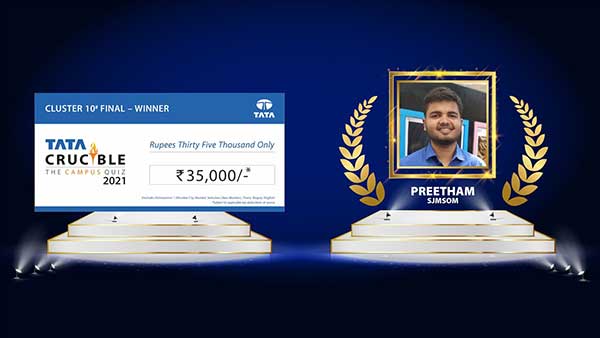 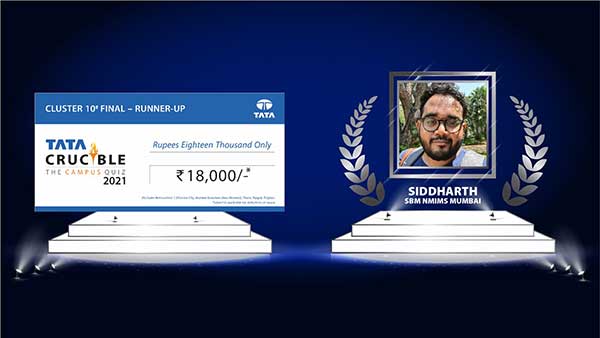 The first of the Maharashtra cluster finals was largely represented by the city of Mumbai. Always known for its business acumen and extremely talented students from the colleges in and around the city of Mumbai, the quiz was a thriller from the word go. Ms. Rashmi Furtado raised the bar in the wild card, ensuring the level of the quiz lived up to the reputation of the cluster. The six who made it to the cluster final were:

The final hosted by seasoned quizmaster Pickbrain, tested the contestants on a wide range of subjects. Siddharth was the first to get off the block and get into the lead. Jay, Preetham and Nikhil also started scoring in quick succession, resulting in the final becoming a very close battle. As the quiz quickly moved from one question to another, so did the nerves. Even as the quiz entered the last round these contestants were almost on the same score, making it an absolutely riveting finale

One must acknowledge the performance of Jay, who battled valiantly and scored a lot but on the other hand took too many negatives to undo the good work that he had done. Siddharth and Preetham played a very clever game ensuring they did not take any negatives. Siddharth, in retrospect, would believe he should have taken a few more chances while Preetham brought in all his experience to score when required and clinch the title in style.

The chief guest, Mr. Siddharth Sharma, Group Chief Sustainability Officer at Tata Sons, appreciated the efforts of the team and the knowledge displayed by the contestants. He advised the students on the importance of areas like sustainability in the future and how one needs to learn to read the changes that would occur in the world and constantly be ready for the same.