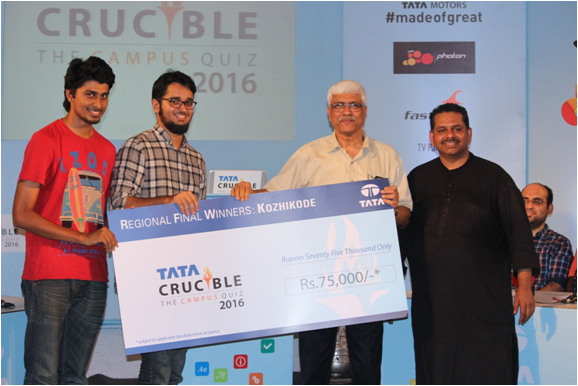 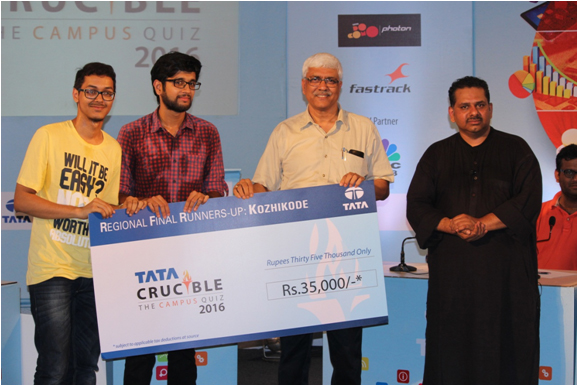 It was interesting to see child-like excitement on the faces of students from NIT’s and IIM’s. Add to it a prize amount of 5.75 Lakh and a couple of cars from Tata Motors waiting for the winners and the tension was also visible.

Quizmaster Pickbrain started proceedings with crisp introductions and moved on in very a business-like manner, clinical and swift with the prelim breezing through the 20 questions. Teams that were placed 5th to 10th were called on to play a ‘knockout’ that resulted in two more teams making it to the finale.

The format of the final was very interesting and fair to all the teams where they get multiple attempts on each question with the possibility for the team attempting second on a question, also having the option to decide the value they want to play by a ‘Powerplay’.

The final was a cliff-hanger with all the teams evenly placed at the end of the first segment. The quality of answers underlined the ever increasing interest and comfort towards a Tata Crucible in this region of India. In the mid segment, the quiz opened with the IIM teams on stage with two NIT teams also inching forward with good strikes. Tactics were tested in the next rounds as IIM lost out taking some risks while the NIT teams moved ahead.

As the excitement mounted and the quiz inched to the final questions, it was a battle between the NIT teams. Nakul and Ameen got their act right and clinched the title while their friends Sreerang and Shubham had to settle for the runner up.

The guest of honour Dr. Shivaji Chakravarthy, Director NIT Calicut, congratulated the teams and gave them their cheques.