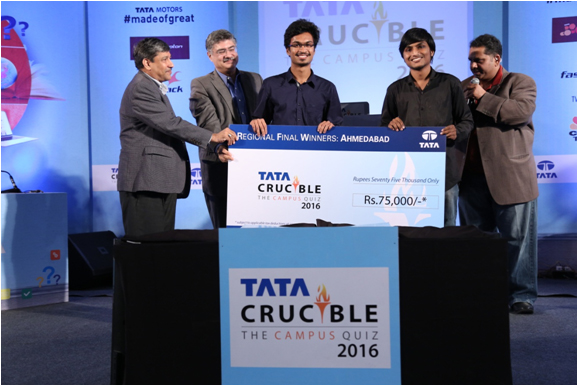 ‘Ahmedabad is a big stop over for Tata Crucible’ thundered quizmaster Pickbrain as he commenced proceedings at the most eagerly awaited business quiz of the year. With the IIM campus abuzz with students from all over the city, the excitement was visible. A tough prelim led to the top six teams in the final.

The finale was gripping with the duo of Mohit and Harris from IIM-A getting off to a flier. Even before the other teams could settle in, it seemed like they would win the quiz hands down. However, they chose to keep quiet over the next couple of rounds and that gave the law students from GNLU and LDCE a chance to claw their way ahead.

The teams from MICA did try their best to gain some traction but could not move beyond a point. It was soon a clear three-way battle between IIM-A, GNLU and LDCE. The LDCE team were trailing third, for the most part as the battle seemed to be between GNLU and IIM-A. However, a couple of big strikes and they were in the lead, backed by their refusal to give in and belief in themselves.

They had to wade past some nervous final questions, to register a historic win for LDCE, their first ever Crucible title, as an institute. Proud and happy, they now march into the zonals. Good presence of mind ensured the GNLU team get past IIM-A to finish runner up.

The guest of honour was Dr. Ashish Nanda, Director, IIM-A who appreciated the initiative and the students for their sharp responses. Mr. Hasit Kaji, Head TCS Ahmedabad was also present.