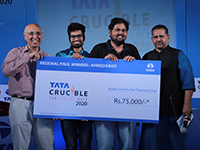 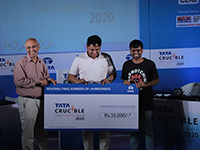 Over 200 students were part of the city edition of the annual quiz that is hugely popular and keenly contested here. Ms. Rashmi Furtado dished out a tough prelim that lived up to the expectations of a well-prepared audience. The teams that made it to the stage rounds were:

The final was anchored by noted quizmaster Pickbrain who, like Rashmi had a tough final lined up for the teams. It led to a low scoring final where the teams were very careful and cautious. This meant all the teams were close to each other on the scores giving all of them a fair chance to win right through the finals.

The Nirma University team went into the lead for a while but the duo from IIM Ahmedabad scripted a comeback while the MICA teams and the GNLU team did well in bursts to keep the audience at the edge of their seats. The battle remained close to the final rounds and on the final question, both Nirma and IIM were locked on the same score. The Nirma University duo took on the final question bravely to clinch the title with a clever answer.

The guest of honour, Dr. Anup Singh, Director General, Nirma University spoke of how the world was dynamic and learning was a lifelong requirement. He also underlined how the learning was both inside and outside classrooms.