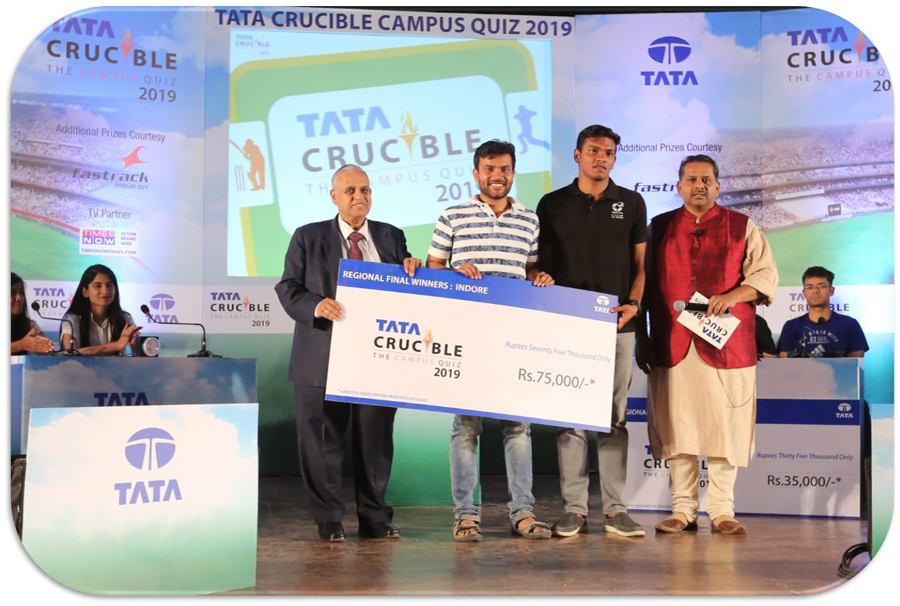 The seventh match of the 2019 campus edition of Tata Crucible was held in the massive auditorium of DAV University at Indore. The match kicked off with over 400 people taking part. The prelim was a tough one, testing even the best teams that were around. The team from IIM Indore dominated the super over.

The final saw an amazing battle between the IIMs and Prakhar and Anmol of IIPS. While the latter played well early on, they were not able to maintain the momentum to get past the IIMs. From the IIMs it was Divij and Samir who made headway with early hits, as Siddharth and Aditya came back with superb strikes to get ahead.

The duo of Akash and Deepak had started well but lost their way with some bad misses, but decided to make a strong comeback and not give in. They went for the big hits and got 3 sixes in quick succession to get to the lead and continued their aggression to hit two more big ones and get to 30 runs, ala Dhoni as the quizmaster put it to win a memorable game.

In the battle, Siddharth and Aditya realised at some point that they would not be able to get past Akash and Deepak, so they displayed a lot of maturity to dig in and hold out for the runner up title winning themselves Rs.35,000.

The guest of honour Narendra Kumar Dhakad, Vice Chancellor, DAV university appreciated the initiative, the teams and advised them to play the game outside their classrooms as that is a sea of opportunity.